Nigeria have no margin for error in Alexandria 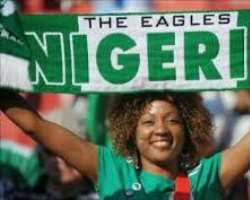 The decision of Chad to withdraw from Afcon qualifying means that the trip to Egypt is essentially a winner-takes-all, straight shootout for top spot. The stakes couldn’t be higher

Having struggled all through the Cup of Nations 2017 qualification series to spontaneously achieve focus, it has taken an event over which Nigeria exerts no control to simplify the task ahead.

Chad's withdrawal from qualification means all results involving them in the group are invalidated. In terms of the numbers game, this changes almost nothing; the Super Eagles remain two points adrift of Egypt, and one ahead of Tanzania.

The only potential difference is that Egypt’s goal difference has been cut, and after their 5-1 victory over the Chadians earlier in the campaign, in this aspect, there’s a slight advantage to Nigeria.

The bigger picture though is suggestive of a different reality: chaos.

Caf's rules eliminate the possibility of a group putting forward a best second-placed contender, in an eerily pedantic presaging of precisely this sort of happening. In truth, with the return leg against the Chadians in N'Djamena now off the calendar, it is unlikely that anyone would be able to score enough points anyway, regardless of the proviso. This completely removes the margin for error: Nigeria simply must beat Egypt in Alexandria on Tuesday to move into the driver's seat in the group. Failing this, Gabon 2017 will almost certainly go on without the 2013 champions. Never before has Nigeria failed to qualify for consecutive Cups of Nations.

It would also be a third miss in four editions. Two of those misses have a common denominator; the man in the dugout is celebrated as one of Nigeria's foremost attacking coaches, but even Samson Siasia would struggle with such a blemish on his CV.

As with his first shot back in 2011, the temptation to fault events and outcomes which precede his appointment are present. What is impossible to deny though is that, were he to lose in Egypt, Siasia will once again take much of the flak—thankfully, he seems unperturbed by the role of patsy, and resigned to his streak of sadistic unluckiness. It will be interesting to see what changes he makes from the first leg in Kaduna. Ogenyi Onazi returns from a suspension, and will have to fight for a spot alongside team captain John Obi Mikel in midfield. This could see first-leg goalscorer Oghenekaro Etebo relegated to the bench; in truth, he will not be missed, at least not in that position.

The pair of Ahmed Musa and Kelechi Iheanacho grew slowly into Friday's game. After the interval, the former played much closer to striker Odion Ighalo and drew some good saves from Mohamed El Shenaawy coming in off the right flank. His performance in the first half though was reminiscent of the inhibition with which he seemed to play under the weight of the captaincy, one now divested. Whether the second half improvement should be enough to see him keep his place remains to be seen.

Iheanacho on his part was anonymous in the first half in a role that was somewhat undefined. With the team lacking a penetrative passer in the first half, the Manchester City man was unable to receive the ball in advanced areas. The second half saw Egypt shift into a lower defensive block, which suited Iheanacho down to the ground. With Hector Cuper brash in the build-up and publicly targeting a win – a pragmatic coach such as he is well aware he does not have to win, surely – it could mean more of the high pressure that hinderered the Super Eagles build-up in Kaduna. It is a gamble, but perhaps Alex Iwobi would be a better fit in the hole. The youngster got about ten minutes of action on Friday, but his delightful scooped pass for Victor Moses deserved a lot better. Crucially, his interpretation of the role is more midfielder than forward, unlike Iheanacho, a factor which should help the team advance play through the middle.

Too much too soon? Well, only two weeks ago, his cool head and quick feet saw him hold his own quite handily at the home of the European champions. Camp Nou is no Borg El Arab Stadium, naturally, but it is becoming harder and harder to ignore his talents.

If there is any succour to be had, it is in the fact Egypt have lost three of their last five Cup of Nations qualifiers at home—the task is eminently achievable against a nation rebuilding a fragile football psyche.

The Pharaohs have the advantage, but are arguably under greater pressure, having not been present at a competition they have dominated like no other for six years. In the battle of two crippled giants, and with the stakes so high, only one will stand tall on Tuesday.