PDP BONNY/DEGEMA Constituency Candidate, Randolph Brown Takes As Wipe At Rivers Elders And Traditional Rulers Over Continuous Silence On The Reign Of Terror And Fascism By APC In The State 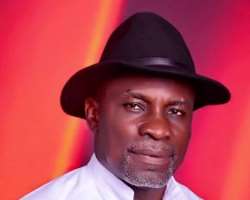 With great delight I extend my warmest congratulations to the Rivers State Governor, His Excellency, Chief Barr. Nyesom Ezenwo Wike over victory of the Peoples’ Democratic Party in the recent State House of Assembly and National Assembly re-run elections in the state.

Apparently, PDP’s victory was as a result of Governor Wike’s doggedness and purposeful leadership under God’s guidance, and the people’s unwavering faith in his ability to continue to deliver on the dividends of democracy.

We are all witnesses to the unfolding drama that characterized the recent elections in the state, consequently we condemn in its entirety, such blatant display of impunity and fascism by proponents of the All Progressive Congress, APC led by the Federal Minister of Transport, Chibuike Rotimi Amaechi and the Rivers APC Guber candidate, Dakuku Peterside.

I am particularly concerned and disappointed with the traditional rulers and elders of this state who have continued to remain silent over this reign of tyranny and intimidation by APC. We believe the time to rise up collectively and condemn this fascist tendencies is now, as sustained silence will not only project the state in very bad light, but also scare away potential investors who ordinarily would have provided employment opportunities for our teeming unemployed youths.

Furthermore, we condemn in strong terms the presentation of fake electoral materials, either by accident or design by the Independent Electoral Commission, INEC for the conduct of the rerun elections in Bonny Local Government Area, This dishonorable act and show of shame by INEC was deliberately orchestrated to create disharmony and wanton advantage for APC in conspiracy with APC and compromised INEC staff in a community adjudged the most peaceful in the state where peace has continued to reign supreme

Let me use this opportunity to thank the people of Degema LGA for their love and commitment that translated to victory for PDP in the area, and to subtly urge the good people of Bonny LGA to remain calm and go about their lawful duties until a substantive date is chosen for the rescheduled election.