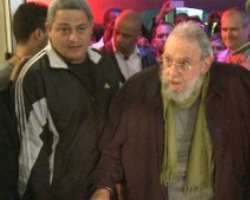 The former Cuban revolutionary leader published a letter in state-controlled media titled “Brother Obama,” in which he recalled the U.S.'s past efforts to overthrow his government.

“We do not need the empire to give us anything,” Castro wrote.

It was the elder Castro's first response to Obama's two-and-a-half-day visit last week, during which the president said he came to the country to bury the final vestige of the Cold War in the Western Hemisphere.

Obama met with Cuban leader Raúl Castro, Fidel's younger brother, but did not meet with the revolutionary leader, who is reportedly in poor health. Fidel Castro handed over power in 2008.

The president's visit was designed to cement his push to normalize relations with Cuba after five decades of isolation. The U.S. government is trying to establish closer trade and travel ties with Cuba while persuading the country's leaders to enact political reforms and improve human rights.

At the same time, Obama sought to convince Cubans that the U.S. isn't interested in reprising past efforts to overthrow the Castro regime.

But Fidel Castro rattled off a laundry list of past U.S. aggression against Cuba, including the 1961 Bay of Pigs invasion. And he lectured the U.S. about its role in propping up South Africa's apartheid government, which Castro opposed.

“My modest suggestion is to reflect and do not try now to develop theories about Cuban politics,” Castro wrote of Obama.

The president’s efforts to allow U.S. businesses to operate in Cuba also appeared to have angered Castro, who seized American business and property during the 1959 Cuban revolution.

By most measures, Cuba’s economy is on life support. But Castro insisted the communist system he put in place can provide for the island’s citizens.

“No one should pretend the people of this noble and selfless country give up its glory and rights,” he wrote. “We are able to produce food and material wealth we need with the effort and intelligence of our people.”

White House press secretary Josh Earnest called Castro’s op-ed “an indication that the trip had its intended effect” of pressuring the Cuban government to adopt economic and political reforms.