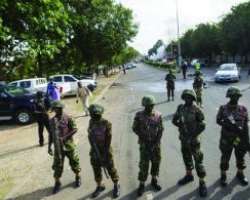 A senior Army officer serving at the Nigerian Army School of Infantry Jaji in Kaduna State, Colonel Samaila Inusa, has been abducted by unknown gunmen.

The gunmen suspected to be kidnappers at the weekend whisked away the officer who was riding in his Mercedes-Benz car around Kamazo, along Kaduna Refinery Road, in Chikun local government area of Kaduna State. He was with his wife.

The Deputy Director, Public Relations of the One Mechanised Division, Colonel Usman Abdul, disclosed this on Sunday in the Nigeria's northwest state.

“The abductors dropped off Colonel Inusa's wife and left with him in his car. The car headed towards Abuja,” Abdul said in a statement on Sunday.

He added,  “This is to inform the general public that a senior officer of the Nigerian Army, Colonel Samaila Inusa serving in Nigerian Army School of Infantry Jaji Kaduna was abducted around Kamazo near NNPC junction, Kaduna.

“The abductors dropped off his wife and left with him in his car. The car headed towards Abuja.

“Anybody with useful information or assistance should please assist in tracking these abductors. They are in a Mercedes Benz GLK Black colour with registration number Abuja, KUJ 154 TZ.

The General Officer Commanding (GOC) 1 Mechanized Division of the Army, Major General Adeniyi Oyebade, has promised N500,000 cash reward for anyone with useful information that could lead to the release of Col. Inusa.

Division Spokesman, Col. Usman assured that such information would be treated with utmost confidentiality.