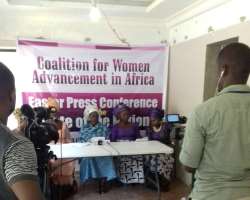 Following the recent video footage released by the Boko Haram leader, Abubakar Shekau announcing and enjoining his fighters to surrender, a group, the Coalition for Women Advancement in Africa (COWAA) has described the development as a major breakthrough by the military in the war against the Boko Haram insurgency.

In a press conference on Sunday, Executive Vice President of the group, Mrs Jummai Samuel Pukat said the group in its quest to authenticate the video, has recruited the services of forensic experts and can ascertain the veracity of the video by Shekau.

Pukat however, called on the Nigeria army to sustain its onslaught against the few remaining terrorists who may want to continue with their nefarious crimes.

She said, "We have authoritatively confirmed the video after subjecting it to scientific scrutiny and wish to say it is authentic and represents the reaction of the group to the ongoing merciless onslaught being carried out by the Nigerian Army. As mothers of the nation we are calling on President Muhammadu Buhari to see to an amnesty for those who are ready to lay down their arms and encourage the Nigerian Army to flush out every criminal elements or factional group that fails to utilize the opportunity of the declaration of surrender by Abubakar Shekau who has been known over the years as the leader of the group.

"In the same spirit of a new Nigeria devoid of the killings, kidnappings and terrorism that Nigerians were elated to view the video of their longest nightmare in the person of Boko Haram leader, Abubakar Shekau almost grovelling as he declared that ‘I am finished’.

"Even without uttering those welcome words about being finished, which we believe equally applies to the terror group with which he brought this country down to its knees, the body language of the Shekau we saw in the video was that of a man who together with his minion are receiving the drubbing of their lives from the Nigerian Army ably supported by the Air Force."

The group commended the Army for sustaining the onslaught on the terrorists in a manner that the degraded Boko Haram to the point where Shekau was flushed out to give proof of life to his own so called followers.

"However, our wish is to reiterate our resolve for lasting peace. We cannot get lasting peace by allowing Shekau and his remaining Amirs the luxury of being able to re-group and restore their ability to take on the Nigerian Army. The decision makers in the Army should let the federal government know what is needed to help these abominations called terrorists keep their appointments with their makers," she said

She said the Army must not relent, but should get more ammunitions and artillery to further decimate the ranks of terrorists.

She said While Shekau as the head of Boko Haram deserves whatever he gets, amnesty should be handed over to all those who were forcefully indoctrinated into the terror group’s criminality as a way of further decimating whatever structure the criminal thought would survive him.

"we reiterate our position that Amnesty should be granted to those who were forcefully indoctrinated into the movement while those who wish to remain on are treated as mere criminals by the Nigerian Army."

She said the immediate rescue of the 16 women abducted by Boko Haram should be commended by all Nigerians, stressing that the timely rescue should be a reminder that anyone abducted shall be found and set free.