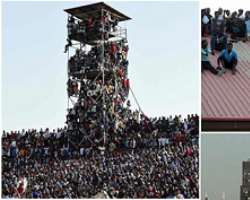 The Nigerian Super Eagles last night were held to a one whole draw with the Pharoahs of Egypt during their African Cup of Nations first leg qualifiers at the Ahmadu Bello Stadium in Kaduna.

Not many Nigerians are in love with the team though with excuses due to the team's previous performances which have made many lose interest in supporting or watching their matches.

But Nigerians being who they are will always have a second thought to things as this time despite the management crisis in the team and several poor outing, the team get a surprise support from the crowd that came out to cheer them.

What shocked many sports aficionados was how the stadium which is suppose to carry 16,000 spectators was full to brim containing about 40,000 with many climbing anything they see just to have a glimpse of the tactics Samson Siasia had introduced to the team.

Some spectators' climbed floodlights, scaffolding while some even sat on the rooftop all to show their support for the team.