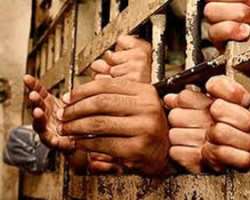 Prison officials in Lagos say eight babies are currently living with their mothers in Kirikiri prison and nine other inmates are pregnant.

It comes amidst moves to decongest prisons in Lagos.

Mrs Omotilewa lbirogba, the Director, Directorate of Citizens Rights (DCR), Lagos State Ministry of Justice, said:”Of the 222 inmates, there are 175 are awaiting trial, 43 convicted inmates, two inmates that are serving life sentences and two inmates who have been sentenced to death.

On the future of the eight babies, Ibirogba explained that once the infants attained the age of 24 months, they would be taken away from their mothers and handed over to appointed relations to nurture them.

The director added: “Our findings revealed that a lot of the inmates already have legal representations and have been granted bail by the courts but have not been able to perfect their bail conditions.

“There are plans by my Directorate to provide free legal services to those whose cases are not going on well in the courts, while applications will be filed to vary bail conditions for those already granted bail by the courts.

“Contrary to what obtained in the past, the inmates looked neat, healthy, well fed and had no rashes on their bodies.”