Fuel scarcity to persist till May: Kachikwu 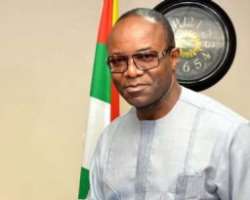 Nigerians are in for a long haul in the agonising search for petrol to power their vehicles and generate light for their homes, according to the words that came from the  Minister of State Petroleum, Emmanuel Ibe Kachikwu on Wednesday.

Kachikwu was unequivocal that the current fuel scarcity will persist for the next two months.

Nigerians since the inception of Muhammadu Buhari administration last May have been subjected to endless fuel scarcity, even as electricity supply has continued to plummet.

Unfortunately, the government does not have immediate answers and the minister said that  it was even share magic that the filling stations have the amount of products currently being dispensed to Nigerians.

The Minister blamed it all to lack of reserves, saying that plans are on ground to reserve all refined products from Nigeria's refineries, while NNPC will go back to importing only the capacity it can while the rest will be left to the oil majors in the country so as to ease the queues at the filling stations.

Kachikwu who said the meeting with the President was very fruitful and reassuring to the unions said on when the queues disappear, “One of the trainings I did not receive is that of a magician but I am working very hard to ensure some of these issues go away?. And let's be honest, for the five to six months we have been here, NNPC has moved from a 50 per cent importer of products to basically a 100 per cent importer. And the 445 barrels that were allocated was to cover between 50 and 55 percent importation.

“So is quite frankly share magic that we even have the amount of products at the stations. We are looking to see how to get foreign exchange input, the President and I discussed extensively on how to get more crude directed at importation. His Excellency will rather have less crude but have individuals in the society suffer less with inconveniences than have more crude and have them continue to suffer.

“So we are going to put a new model to enable us increase the pace and actually get majors as part of the crew of those to bring in more products so that the NNPC will sort of go back on the capacity of what it use to do and the majors will take over the balance of importation.

“I think if we do that although I don't want to put a time frame but I will expect that over the next two months. Of course you are aware the DSAP programme begins in April so over the next two months we should see quite frankly a complete elimination of this. Our strategy is that whatever is produced in the refineries will not go for sale, we are going to keep them in strategic reserve. Because the key problem here is that there is no reserve anytime there is gap in supply it goes off. So we are going to dedicate the next couple of months to moving all the products that we produce to strategic reserve so that we can pile up reserves in the nation and that will push up the reserves in the nation. Believe me this is giving me and my team sleepless nights and we are working on it and we are committed to making this go away, Nigerians should please bear with us”

Speaking on the meeting with the President, the NNPC GMD said it  was basically to review in the oil industry some of the concerns areas that he himself is trying to find joint solutions and share thoughts.

“Like you know his Excellency has too many constituencies first will be politics, second army and the third will be the oil industry, so matter of this nature touches his heart very much. And this is the first opportunity that the unions have had to spend a bit of time with him as a father. So we shared thoughts, areas of concerns and some solution potentials and agreed to collaborate and work together”.

He highlighted the areas discussed at the meeting to include the quick passage of the Petroleum Industry Bill (PIB), the issue of fuel scarcity, the refineries and other logistics issues plaguing the industry.

The NNPC boss said Buhari assured the unions that he was willing to work  together with them to bring good jobs, tasking them as agents of change within the respective areas where they work? to ensure that they continue to look out, contribute, take change on its head and make it happen.

“His also commended the unions for recognizing the difficulties this government has inherited. A lot of these problems that are on the table was quite frankly there when we came and we are doing the best we can to try and work on it. But we are looking to work collaboratively those were the assurances”.

He said the meeting was quite interesting in terms of the emotional attachment of “Mr. President on the issue of oil and gas sector and the challenges we are facing as a nation. We tabled the issue of fuel scarcity, the quick passage of the PIB and to see how the sector bounces back economically and to make Nigerians smile again.

“Clearly we talked more on the corruption on the oil and gas sector, products allocations, Mr. President has assured that both NUPENG and PENGASSAN will continue to be part of the restructuring that he is going to make to look into these issues and to make sure that scarcity are reversed at our filling stations”.

Also President of PENGASSAN, Comrade Olabode Francis Johnson ?said, “We had a very successful meeting with the C-in-C and one of the highlight of the meeting ?was when he said he created the NNPC and he is emotionally attached to it and that everything that is going to happen in NNPC must follow due process. He said he is concern about what Nigerians are going through and he bears their pains and whatever he is going to do he will do it with their support so that Nigerians can enjoy the benefits of NNPC.

“As leaders we are very satisfied with what he said, the commitment and the passion he has shown for the industry. PIB is an executive bill; he said all the legal framework will be addressed ?so that it will be of benefit of Nigerians. He also showed concern for pipeline vandalism and crude oil theft and we know that will support and collaboration he is going to achieve results”.