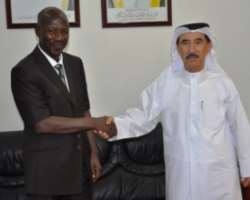 An attempt by a yet to be identified former Nigerian governor to transfer $517million out of United Arab Emirates to Dominican Republic has been blocked by the authorities.

Following the agreement, the federal government has intensified action in this direction with deepened searchlight on banking vaults and properties where Nigerian officials had kept or invested their loot.

The Nation Newspaper had earlier reported a Federal Government team, comprising the Minister of Justice and Attorney-General of the Federation, Mr. Abubakar Malami, the Chairman of the Economic and Financial Crimes Commission (EFCC), Mr. Ibrahim Magu and crack detectives from the anti-graft agency, are in Dubai and have started comparing collated intelligence notes on the PEPs with their UAE counterparts.

The EFCC officials arrived in Dubai on Saturday, said the newspaper. The Minister left Abuja Tuesday to join the team.

Seven former governors, six former ministers and a fleeing presidential aide implicated in the $2.1billion arms deals, ex-military chiefs under probe, agents / fronts of some of these public officers and about five chieftains of the Peoples Democratic Party(PDP) have either stashed away funds in Dubai or acquired properties.

A confident source said: “The Federal Government team has met with those from the UAE on intelligence sharing, the list of those on EFCC radar, the number of highly-placed Nigerians with fat accounts in UAE and those with choice properties in Marina (Dubai), Bur Dubai, Abu Dhabi and Doha.

“More than six ex-ministers and a former presidential aide, who is on the run over the $2.1billion arms deals, were said to have acquired choice mansions and malls in UAE.