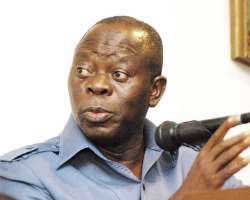 Edo State Governor, Mr. Adams Oshiomhole, has condemned calls for the sacking of the Governor of Central Bank of Nigeria (CBN), Godwin Emefiele, describing those behind the calls as 'Facebook manipulators and palm wine drinkers.'

The governor explained that the people spearheading the agitation are those 'who have been feeding fat on our common patrimony and manipulating the exchange rate, moving money across borders and taking advantage of electronic money transfer'.

Oshiomhole spoke with journalists on Wednesday evening in Abuja during a visit to the National Universities Commission to obtain license for the second newly established Edo State University, located in his village, Iyamho.

He advised proponents of the calls to stop wasting their time because President Muhammadu Buhari will not be deceived.

He added the hiring and firing of CBN governor might not be a political decision because institutions must be respected.

Oshiomhole said, 'If a CBN governor is doing fine, the hiring and firing is not a matter that should be discussed by Facebook manipulators and by the time you unmasked the people behind it, they are palm wine drinkers.

'President Buhari is not going to be fooled by people who want to have a regime where government is just an onlooker and allow the naira to become worthless and people are making money from speculations; so, those guys are wasting their time.

'We have a new Federal Government that has won election on the basis on a mantra of change and there are all kinds of people who have made a lot of money from the economy without contributing anything by just playing on exchange rates.'

The governor explained there were many challenges in running the economy, especially when there is limited inflow of forex.

'And you do not want to trigger a process that will lead to endless devaluation that ultimately will reduce Nigerian naira to Zimbabwe dollar,' he added. Punch