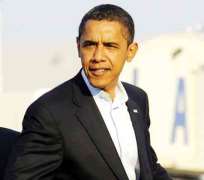 President Barack Obama said the auto industry's revival, including General Motors Company's repayment of its government loans, is 'encouraging' and urged passage of the financial-services overhaul to prevent future bailouts.

'Part of what led to the crisis in our auto industry, and one of the main causes of the economic downturn, were problems in our financial sector,' Obama said in his weekly radio and Internet address. 'Wall Street firms took enormous, irresponsible risks.'

'It's essential that we learn the lessons of this crisis, or we risk repeating it,' he said.

Obama has ramped up administration lobbying for legislation to set up a new regulator within the Federal Reserve to guard consumers against abuse and deception in such instruments as mortgages, credit cards or loans. The measure would also create a mechanism to dismantle important financial firms when they fail, and strengthen oversight of derivatives and hedge funds.

The measure, sponsored by Senate Banking Committee Chairman Christopher Dodd, is necessary to 'restore trust and confidence in our markets,' even though the economy is showing signs of recovery, Obama said. It would 'put an end — once and for all — to taxpayer bailouts,' he said.

The bill is scheduled for a procedural vote in the Senate on April 26. Dodd and the banking panel's top Republican, Richard Shelby of Alabama, are negotiating to incorporate Republican ideas into the measure. Obama sought to keep the pressure on April 22, challenging Wall Street in a New York speech to join rather than fight the overhaul effort.

In his radio address, Obama recalled criticism for his decision to help the auto industry, which shed 400,000 jobs over the course of 2008.

'Many believed this was a fool's errand,' he said.

The United States put up about $50bn in aid for GM, the biggest domestic automaker. No. 3 Chrysler received $12.5bn and gave control and a 20 per cent stake to Italy's Fiat SpA, which agreed to share technology and help expand exports.

'We decided that while providing additional assistance was a risk, the far greater risk to families and communities across our country was to do nothing,' he said.

Obama said the 'auto industry is more stable today,' and the 'economy is on a better footing.'

That's 'a fraction of what was originally feared,' Obama said.

Hutchison said Dodd's bill must be changed to prevent future bailouts. Treating some companies as too big to fail 'perverts free-market capitalism,' Hutchison said. 'These companies take their profits in good times — but when things go bad — they turn to the government to bail them out.'

'We will stand firm against a partisan bill that exposes ordinary taxpayers to future bailouts or favors big companies over community banks across America,' Hutchison said. She accused the White House of 'attacking Republican leaders to score political points.'

In his radio address last week, the president said Senate Republican Leader Mitch McConnell McConnell 'made the cynical and deceptive assertion that reform would somehow enable future bailouts — when he knows that it would do just the opposite.'

He also criticized McConnell and Senator John Cornyn of Texas, who heads the Republican Senate Campaign Committee, for meeting with two dozen top Wall Street executives recently 'to talk about how to block progress on this issue.'