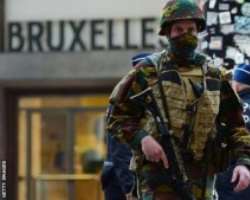 Western intelligence officials believe there are “more than a handful” of Islamic State terrorists connected to the Brussels attacks who are still at large and plotting more attacks, a U.S. official told Yahoo News.

The comments from a U.S. official came as the Islamic State's Web forum took official responsibility for Tuesday's attack and threatened more strikes. The group promised “the alliance of crusaders” that it would see “dark days in response to their aggression against the Islamic State,” according to a statement in Arabic and French that was monitored by MEMRI, a group that tracks jihadist propaganda. The statement continued: “What awaits you will be grievous and bitter, with Allah's permission.”

A U.S. official told Yahoo News “there is no reason to doubt” the Islamic State's claims to be behind the Brussels attacks. The perpetrators that carried out the attacks on the Brussels airport and subway were part of a larger network believed to be “in the dozens” — as many as 30 to 40 — that also carried out last November's attacks in Paris. Some of them have yet to be captured or killed.

“It's a safe presumption that there continue to be people at large who have intentions and plans,” the official said. This was the reason for today's warning by the U.S. Embassy that another attack could be “imminent” and advising Americans in the European capital to be “sheltering in place.” The official noted, however, that the new statement from the Islamic State threatening more attacks could also just be “standard rhetoric.”

Another reason for concern, U.S. officials and counterterrorism experts say, is that Islamic State attacks tend to occur in waves — with multiple strikes happening in different cities within a few days of each other.

Steve Stalinsky, executive director of MEMRI, noted that the Brussels attack —while probably linked to the arrest Friday of the alleged ringleader of the Paris attacks, Salah Abdeslam — could also be part of a coordinated wave that included the bombing in Istanbul over the weekend and the attack that killed a U.S. Marine in northern Iraq.

U.S. officials also told Yahoo News that another theory is that Tuesday's attackers chose to strike now — possibly moving up a long-planned attack — because of comments by Belgium authorities stating that Abdeslam was cooperating with authorities and identifying others in his terrorist network.

“There may have been a sense of urgency [for the attacks] because of a fear that they were going to be rounded up,” said one U.S. official.

Western intelligence services, including the CIA, have been warning ever since the Nov. 13 Paris attacks about the threat of follow-up attacks by the Islamic State or from terrorists in Europe aligned with or directed by the  group. A soldier stands near broken windows after explosions hit the Zaventem airport near Brussels on March 22. (Photo: Francois Lenoir/Reuters)

Brussels, where the Paris attacks were believed to have been planned, is a particular hotbed of terrorist activity. About 470 jihadis from Belgium are believed to have gone to fight in the Syria-Iraq conflicts in recent years, with some 118 reported to have returned to Belgium, according to a report last December by the Soufan Group, an international consulting firm.

U.S. officials, however, acknowledge that they had no specific warning about the Tuesday attack, raising continuing questions about how members of the Belgium terrorist network have been able to communicate without detection by Western intelligence services. National Security Agency Director Adm. Mike Rogers recently told Yahoo News in an interview that the agency believes the Paris attackers used encrypted apps — a conclusion that has been confirmed by French authorities, according a report Sunday in the New York Times.

A U.S. source told Yahoo News on Tuesday that intelligence officials believe the Paris-Brussels networks have communicated through a “combination” of encrypted communications and highly disciplined face-to-face communications. As further evidence that U.S. officials had no inkling about an imminent attack in Belgium, Nicholas Rasmussen, director of the National Counterterrorism Center, had just been in Brussels on Sunday, speaking at the German Marshall Fund security forum .

“They didn't have a clue about this,” one U.S. counterterrorism source told Yahoo News.