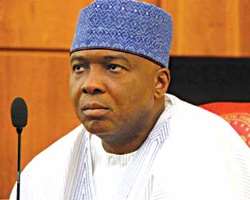 Justice Abdukadir Abdu-Kafarati of a Federal High Court in Abuja on Tuesday withdrew from the case filed by the Senate President, Dr. Bukola Saraki, seeking an order to stop his trial for false assets declaration before the Code of Conduct Tribunal.

â€ŽThe development which followed online media reports accusing the judge of having been compromised by Saraki stalled the judgment that was to be delivered in the case on Tuesday.

The judge, who quoted copiously the online reports, said he had been caught between two devils.

Justice Abdul-Kafarati had on March 1, heard and fixed Tuesday for judgment in Saraki's case.

The judgment was to come on the heel of an earlier verdict of the Supreme Court which had on February 5 validated the Senate President's trial before the CCT.

Incidentally, the CCT itself on March 18 fixed Thursday to deliver its ruling on Saraki's another application challenging the validity of the charges and the tribunal's jurisdiction to entertain the case.

An earlier application by Saraki seeking an order halting his trial â€Žwas dismissed by the CCT, and the tribunal's ruling became a subject of appeals which he lost at the Court of Appeal and finally laid to rest by the Supreme Court's judgment which also dismissed it on February 5.

Both his suit before the Federal High Court and his â€Žfresh application before the CCT are anchored primarily on the same grounds.

He argued, essentially in the two legal actions, that the charges had been rendered invalid, robbing the tribunal of its jurisdictions due to failure of the Code of Conduct Bureau to invite him and confront him with the alleged infractions in his assets declaration forms before filing the charges.

He contended that the failure of the CCB to confront him with the said infractions constituted a breach of his fundamental human rights to fair hearing and by extension rendered the charges a nullity.

Meanwhile, the Federal Government, through its lawyer, Mr. Rotimi Jacobs (SAN), had during the hearing of Saraki's suit before Justice Abdu-Kafarati, urged the court resist the temptation of overruling the Supreme Court by going ahead to stop the Senate President's trial before the CCT.

Jacobs urged Justice Abdu-Kafarati to dismiss the suit which he said was not fit to be instituted under the fundamental human rights enforcement proceedings.

The lawyer, while arguing his notice of preliminary objection, accused the Senate President of raising the issue of violation of his rights to fair hearing in order to escape trial.

He contended that the suit by Saraki was an abuse of court process, the issues in it having been raised in another pending suit filed by the Senate President before the Federal High Court in Abuja to stop his trial and also in his objection filed before the CCT but was dismissed by the Supreme Court.

The lawyer argued that the suit amounted to an invitation to the judge to overrule the Supreme Court, which had validated the competence of the charges. – Punch.