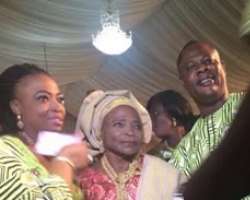 The actress happens to be the mother of actors, Muka and Lasun Ray, who have been doing well for themselves in the Yoruba movie industry thereby making her proud.

Mama Ray is one of the wives of one of the pioneers of Nigerian movie industry late Ray Eyiwumi, who died on April 15, 1986.