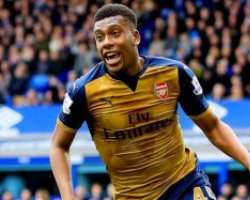 He wasn’t the first to be thrown in at the deep end. And he probably won’t be the last.

Arsene Wenger has previous when it comes to making surprising selections in big games; remember when he threw Yaya Sanogo in to the starting line-up against Bayern Munich?

Yet with Alex Iwobi it was different. For the Nou Camp leg of a Champions League knockout tie that was already beyond his team, Wenger chose to hand Iwobi his first start in either Europe or the Premier League. Daunting surroundings for an inexperienced youngster, but perhaps the perfect time for him to come in. Iwobi gets a shot off at Barcelona CREDIT: GETTY IMAGES

T he pressure was off Arsenal and Iwobi. They were deeply unlikely to progress against the best team in the world. Iwobi’s inclusion was not necessarily a sign of Wenger’s mistrust in current players, but rather a chance to rotate ahead of a crunch game at Everton.

Iwobi took his chance, though. In what were nervy opening exchanges he was often a cool head along with more likely candidates in Mesut Ozil and Alexis Sanchez.

His touch and control were impeccable. Time and again he brought calm to the team in tight positions in front of his own back four. Time and again came in off his berth on the left flank to seek possession rather than just sit on the periphery. Time and again he carried the ball forward directly and caused Barcelona’s defence problems. When he and Danny Welbeck were withdrawn with 19 minutes to go Arsenal lost their two best attacking threats. A nd so he retained his place for the trip to Everton on Saturday – and rightly so. Again he lined up on the left and again he was influential, drifting in-field to exchange positions with Ozil and Sanchez.

Over the two games he maintained a pass success rate of 80.3 per cent. Ozil and Sanchez were the only players who created more chances than Iwobi’s four. Only Danny Welbeck, with six, had more shots than his five.

At Goodison Park just four players touched the ball more than him – Bellerin, Ozil, Sanchez and Francis Coquelin. He scored a well-taken goal that settled nerves and effectively killed the game off early on. He also made as many tackles as any other Arsenal player, with four. Iwobi was man of the man against Everton CREDIT: GETTY IMAGES

A s can be seen on his touch-map above he did plenty off work in central positions – he is far from an orthodox winger. When Ozil was replaced by Kieran Gibbs it was telling that it was Iwobi rather than Sanchez who was moved to a central position behind the lone centre-forward.

•  Team of season will reflect seismic shift
He appears to have one of those football brains that naturally visualises the play about four steps ahead, and even at the age of 19 attempts to dictate proceedings, regardless of who the player he's directing happens to be.

In both of his appearances he was a constant nuisance. He even caused annoyance with his own team-mates, having short disagreements with – among others – World Cup winner Ozil about where someone should be at a certain time. I n one attack in the Everton game, he receives the ball in the Everton half and immediately spots the space that should be utilised, keeping the ball until one of Ozil or Welbeck makes the run he expects them to, which is where that yellow arrow points (above). Both are in the same position and not making use of space properly, preventing Arsenal overloading and being able to link properly.

Neither makes the run quickly enough and so Iwobi carries the ball forward, constantly glancing around to see where his team-mates have gone. T he ball is passed to Ozil and the defence retreats. This is where Iwobi immediately moves towards the outside of the box to get between the lines and where he knows Ozil will look for him again, as part of the quick one-two movements that Wenger loves. T he return pass is made to complete the triangle but Ozil can't quite get into space behind the defence. Either way, he manages to get a shot at goal which deflects behind for a corner.

•  Past-it XI: who should just give up?
Iwobi is clearly an Arsene Wenger player. As a graduate of the Wenger-influenced Arsenal academy, you'd expect him to be naturally technically gifted and adept at finding a pass, but one of the most impressive aspects of Iwobi's play is the way he reads the game – particularly the transition between defence and attack.

Iwobi's pace gives Arsenal a whole new aspect on the counter attack too. I n the first half he played a poorly guided pass directly to James McCarthy but sought to make amends immediately, following the ball and not pulling out of a potentially painful 50/50 straight after. T he Everton midfielder is dispossessed by a good, strong foot which also happens to play the ball away from McCarthy and towards a team-mate. R ealising that suddenly the team is in transition, Iwobi breaks forwards and takes a ball over the top from Hector Bellerin which he then carries – at great pace – towards the goal. Five seconds later it’s in the back of the net. T hese traits aren’t particularly revolutionary but Iwobi does them extremely well. For so long now Arsenal have produced or signed players who don’t seem to understand when to attack and when to defend – on the few occasions we’ve seen him in the Arsenal starting XI, Iwobi has displayed a positional and tactical awareness that makes him a valuable part of Wenger’s team.

As previously mentioned, he isn’t the first young player that Wenger has thrown in to tough surroundings. Iwobi’s performances are likely to encourage the Arsenal manager to ensure he isn’t the last, either.