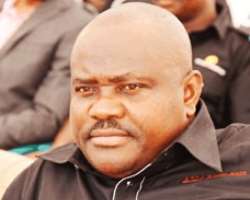 Let me welcome all of you to this press conference and to crave your indulgence to use this opportunity to have a first-hand view of what has transpired so far with regard to the rivers state re-run election of Saturday, March 19, 2016.

Like you already know, the re-run elections were to cover 3 senatorial seats, 12 house of representatives seats and 22 state assembly seats with a total of 37 seats.

First on the strategy of Gov. Nyesom Wike was to deliberately saturate the atmosphere with his threat of death and violence against INEC personnel for the rerun. A few days to the elections, he accused the INEC federal commissioner who was sent to conduct the elections of plotting to swap election results without concrete evidence.

Violence
The rerun election witnessed a well-planned spate of violence by Gov. Nyesom Wike across rivers state. the genesis of this was his repeated threats, killings by his gunmen in one LGA, killing of major Luke and another soldier in Akuku-Toru amongst other killing incidents.

It was glaring that security was inadequate across the state, the only fairly secure areas were the LGA headquarters where a handful of police and army personnel were deployed but were unable to effectively cover other volatile areas/population centres of the LGAs.

In some places like Emohua, no returning and collation officers reported for work giving way for unknown ad-hoc personnel to be recruited for a very sensitive job of result collation. In Gokana, Khana and Andoni, PDP thugs held electoral personnel hostage leading to the suspension of the process.

On election day, it became obvious that the incendiary messages of threat by Gov. Nyesom Wike had driven fear into trained ad-hoc personnel who got scared and refused to turn up for election duties. Subsequently, INEC field officers indiscriminately engaged the services of unknown persons with no training and background checks whatsoever to work as ad-hoc personnel. This led to confusion and obvious sabotage at various places. in the process, Electoral Officers [EOS] took over the work of returning officers with some of them declaring results which is not their job.

The Issue At Mile-1 Police Station
nyesom wike and PDP goons abducted a collation officer for phalga constituency 1 and forcefully took her to mile 1 police station where they forced her to collate and alter the result in favour of the pdp candidate. following SOS from APC agents, some membership of the APC leadership visited the station and confirmed the presence of gov. wike and other pdp leaders who were trying to force the collation officer to alter her work in favour of the pdp candidate with the connivance of the dpo.

They used the police to cease the result and send to the state cid where it was changed. we are surprised that the pdp candidate, blessing nsiegbe has been returned as winner by inec instead of collyns owhondah who was leading before the disruption and abduction. This confirms that gov. wike, pdp and the police connived to change that result in favour of the pdp candidate.

Actions of Police DPOs
before the rerun elections, we cried out to the inspector-general of police for the dpos whose insidious actions during the sham elections of 2015 to be posted out because of the level of compromise with gov. nyesom wike but our calls fell on deaf ears. The dpos this time around simply repeated what they did in the past and, in some cases, took it a notch higher. for example, the ikwerre dpo personnally provided cover for nyesom wike to write the results for the area and escorted the doctored results to inec. same happened in obio/akpor, phalga, emohua and other places.

Cancellation Of Results In Areas APC Were Winning

in this rerun election we established a pattern whereby inec cancelled or suspended results in areas where the APC was winning. we find this unacceptable especially when any resuts smuggled in by the PDP were upheld.

The Assassination Attempt
yesterday, dr. dakuku peterside, myself and hon. asita were in a vehicle on aba road and we noticed that two suvs were trailing us. when we got to utc junction, they had overtaken and blocked us and someone seated in the front with the driver brought out a pistol to shoot when our driver swerved and turned and they were still following us up to corpus christi.

Even when we turned and drove towards the sss office, they were still following us so we passed and started making contacts with the sss and when we drove towards the sss the second time, the sss people were alert and we drove into the SSS compound but before we could do that the assailants opened fire and the sss responded and demobolised their vehicle.

In the process of exchange of gun fire, one of our security personnel was injured on the leg and is receiving treatment in hospital. one of the occupants of the vehicles that attacked us was the chief of staff of nyesom wike, emeka woke who was promptly arrested and undergoing interrogation.

Unlawful Attitude Of Gov. Nyesom Wike And Some Of Officials Of Rivers State Government During And After The Election

Gov. nyesom wike in company of heavily armed soldiers and police with armoured personnel carriers unlawfully visited collation centres in phalga, obio/akpor, ikwerre emolga and other areas where he intimidated electoral personnel and took over the collation of results in those areas and with the connivance of the DPOs, who provided further protection for fake inec ad-hoc staff to collate and declare results. This is in complete conflict of relevant electoral laws. the result of the entire exercise became compromised as a result of the unlawful interference by gov. nyesom wike.

Again, his secretary to government Kenneth Kobani brazingly went to a rac with thugs, shot guns and attempted to cause confusion and violence before he was arrested. the governor’s special adviser on projects was caught with armed thugs in military uniform and n40m on election day at bori.

Position Of The APC
The position of the apc is that the entire rerun election was marred by irregularities, violence and unlawful interferences by nyesom wike, the governor of rivers state, inadequate security, compromised process especially with indiscriminate, irregular and untrained ad-hoc staff in some cases amongst other very serious issues. The apc calls on the inec chairman and its entire management team to cancel the rivers state re-run elections to enable all the pitfalls earlier enumerated to be corrected before a fresh re-run election is held.