Alariwo of Africa and Wife Open Up on their Health Challenges 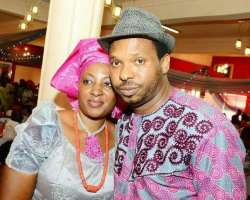 Things have been really tough for Rotimi Martins aka Alariwo Of Africa and his wife, Shola Martins,who had an accident in August 2015 and has not been able to move. The popular singer had once played alongside Kunle Afolayan for Baba Feyikogbon at the special edition called Who Deserves To Be a Millionaire?, where they raised money for him. However, things got out of hands for Alariwo when he developed what is called Varicocele and his own wife also wanted money for her surgery too.There was no money to treat the couple.

Varicocele occurs when veins deprive blood transfusion to the scrotum which leads to other complications when it is not immediately taken care of. Alariwo said “I have already done a surgery but I require another one which will be done outside the country. In my wife's case, she has a condition called pulmonary embolism. It started when she was involved in an auto accident on her way to the market. This has complicated things for us because it happened while I was still trying to raise funds for my surgery. I have to sell my car, because at a point I was buying drugs worth N47,000 daily. It has been very challenging.”

They are travelling to America for these operations and with nothing to fund themselves, miracle has come their way because the couple won N2million in MTN's 'Who Deserves To Be A Millionaire?' this year. And with the support of friends who are contributing to their welfare, things are getting better for the couple.
The Ultima Studios, in charge of the TV money game had met them at a session with their pastor here. “We have become convinced that this is the Lord's doing, and it's from that day we knew it” the wife had said.