Why Gowon Must Write His Memoirs 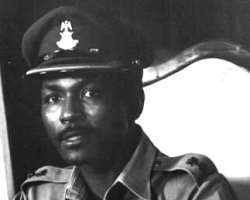 It is no longer news that the oil rich United Arab Emirates (UAE) recently appointed Shamma al-Mazroui, a 22 year old lady as Minister of State for Youths. As announced by Prime Minister Sheikh Mohammed bin Rashid al-Maktoum she will also lead the UAE Youth National Council. Al Mazroui graduated from New York University Abu Dhabi (NYUAD) and has a master’s in Public Policy from the University of Oxford.

That however is in another clime a far cry from us meanwhile long before that back home while addressing the august summit that unveiled a “Road Map” for the opposition back in March 2014, Madam Obiageli Ezekwesili a former minister of the federal republic sermonized to the gathering that has since morphed into the current administration that - “the elite of every successful society always form the nucleus of citizens with the prerequisite education, ethics and capabilities operating in the political sphere and the public service, providing the great ideas to build the nation and possessing the moral rectitude to always act in the public interest”.

The self-described practitioner of public policy went on to affirm that “for every society that has succeeded therefore, it has taken such progressively evolving elite class to identify the problems, forge the political systems and processes, soundly articulate a rallying vision and use sound policies and effective and efficient prioritization of investments (both public and private) and requisite actions to over time build those strong institutions that outlive the best of charismatic and transformative individuals”.

What can be inferred from Mrs Ezekwesili’s homily is that the root cause of our recurrent national crisis is the failure of Nigeria’s ruling elite to transform “a mere geographical expression” into a nation state. Despite that monumental letdown there is no one amongst that antiquated cream that has had the nerve to declare their collective significance obsolete and usher them out to the country’s sidelines. That understandably would be class suicide.

General Yakubu Gowon however sits on a higher moral ground. His remaining duty to Nigeria is to shoo away aging members of our archaic ruling class that have so tenaciously held on to national relevance some for more than 50 years. He has the honesty, integrity and seniority. The General if he comes around presenting his memoirs will help rescue the nation from a serial “squeezing of the balloon” – getting rid of a problem in one place only to see it extend to another.

Nigeria will continue to burst at the seams of more rhetoric and less systemic changes if we cannot articulate our faux pas for the benefit of a “progressively evolving elite class”.

Truth is our country needs more than a frequently flying presidency and a fledging Federal Executive Council that shows more “sensitivity to our diversity”; Nigeria needs to break away from the inevitable entrapment of the dictum that “every successful revolution puts on in time the robes of the tyrant it has deposed” while hoping that the transition from opposition to government has not come with an amnesia of Madam Ezekwesili’s treatise. We have seen that movie before.

Many of those General Gowon ought to shepherd away have consistently failed to “shape circumstances before crises emerge and to meet threats before they become dire”. Nigeria therefore needs a massive generational shift and no one should understand this better than General Gowon who after all became Head of State at the youthful age of 31.

Today the average 31 year old Nigerian is still looking for purpose and direction, suffers from perennial attention deficient, is heavily focused on the information asymmetry of social media and mainly primed to premiership soccer amongst other distractions. The lucky ones are in irregular paid employment with the vast majority pounding the streets clutching sweat drenched CVs still squatting with their parents, other relatives or friends.

According to the National Bureau of Statistics (NBS) there were 70 million youth aged between 15 and 35 out of an estimated Nigerian population of 166 million and that was back in 2012 as reported in its National Youth Survey. Currently the figures even more ominous especially when juxtaposed with prevailing unemployment and poverty rates.

When Nigeria’s foremost military historian Nowa Omoigui in the not too distant past hoped that “It is my expectation that General Yakubu Gowon will publish his memoirs someday” adding “when that eagerly awaited event takes place, much more will fall in place” he was longing for a national closure of sorts.

Perhaps the General does not want to in any way join issues with his esteemed juniors by presenting his memoirs. With the notable exception of General Johnson Aguiyi-Ironsi every past military leader in Nigeria served under his command and colossally benefited from his magnanimity. He was commissioned as an officer in 1956 as a rare flower on the bristled cactus of our army’s officer corps with Generals Murtala Mohammed and Olusegun Obasanjo in 1961 and 1959 respectively. Generals Muhammadu Buhari, Ibrahim Babangida and Sani Abacha commissioned variously in January, September and November 1963 finally Abdulsalami Abubakar in 1967.

Even former President Shehu Shagari who became a minister in 1960 at 35 served as a Permanent Secretary and later Federal Commissioner under him. Today every living Nigerian that claims to be an elder statesman stooped to him from 1966 to 1975 including his army superiors Generals Robert Adeyinka Adebayo and David Akpode Ejoor.

General Gowon insists that Dim Chukwuemeka Ojukwu was his good friend and close colleague. But Lt-Col Ojukwu until his demise never in print make known his take on how the mandarins of Whitehall backdated his (Ojukwu’s) Oxford influenced commission to a year’s seniority over that of the Sandhurst trained General who has till date chosen to keep mute in ‘espirit de corps’ over their once estranged relationship and more importantly the behind the scenes maneuvers at Aburi.

The General is also probably withholding his memoirs due to his controversial stamp of approval for the take-over of Mission schools in 1971 which will certainly be too painful a recollection against the background of how religious fault lines now define the country and particularly his beloved North. He might equally be keeping back on the real justification for the Udoji awards rather than financing an industrial takeoff, other reasons may include the regrettable fine points of the Maroua Declaration back in June 1975 and the tale behind the twist of loyalty by his former Guards Brigade commander which he believes might not be for public consumption.

Meanwhile hardly a day passes in Nigeria without the breaking news of some horrific loss of precious lives either through sectarian strife, religiously inspired violence and callous banditry, bloody clashes between sedentary farmers and pastoralists and now renewed succession threats.

The country is however not rudderless. It has a functional democracy including a sitting government. What Nigeria needs is a wise counsel to a “progressively evolving elite class” that can more deftly avert the nation from an historically inevitable Ibn Khaldian cycle of “a social group coming together to organize themselves and take over governance, institute good leadership, provide an organized economic system, fortify themselves by social reorientation and functional political activities soon afterwards social cohesion begins to drift, dwindle and decay as individualism, greed, avarice crop up in the system”.

General Gowon’s written revelations will no doubt help adjust our national sails. For instance back in 1970 as military Head of State he announced a nine-point agenda for the country which included a reorganization of the armed forces, eradication of corruption, a new revenue allocation formula, creation of new states, organization of genuinely national political parties amongst others which 45 years on, many governments later, at least 2 constitutions down the road and a couple of military-civilian handovers after the points are still topical issues largely unresolved by the same ruling class that created them in the first place. As the crooner Sonny Okosun once sang “Which way Nigeria?”

We are often reminded Nigeria is not a historic state and that it is a quilt of ethnic nationalities that was amalgamated in 1914 for British commercial interests. If the country was quilted for chiefly commercial interests perhaps a reinvention of those interests can keep and sustain our unity.

For the nation to smoothly sail in such new waters away from the mad scramble for political power it needs new and imaginative helmsmen unfettered by the past but guided by the chart the memoirs of General Gowon can provide.

If the insurgency in the North-East ever gets militarily rolled back is there a clear national agenda to fill the political, economic and social void reminiscent of the 3Rs of General Gowon without a critical take from him? It is to his everlasting acclaim that 28 years after he left office a THISDAY editorial dated October 3rd 2003 succinctly stated “succeeding governments have not matched, not to talk of improving on the Gowonian Initiative”.

General Gowon now an octogenarian deserves all the peace and solitude the nation can extend to him in his well deserved retirement that notwithstanding a timeless dictum maintains - “To whom much is given much is expected”.