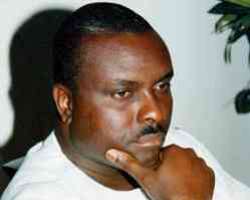 INDICATIONS emerged on Sunday that the Economic and Financial Crimes Commission might engage the International Police to arrest the fleeing former Governor of Delta State, Chief James Ibori.

A reliable source in the commission, who made this known to our correspondent in Warri, explained that the action became imperative following reports that the embattled ex-governor had fled the country.

The source said the management of the anti-graft agency had substituted the regular operatives deployed in Delta State in the wake of the fresh investigation into the leadership of the state by Ibori between 1999 and 2007, with undercover agents to gather information on the present location of the former governor outside the country.

It was learnt that the commission hoped to rely on the intelligence gathering network by the undercover agents to pin Ibori down to a specific country before the INTEPOL would be contacted for assistance.

Speculations were rife that Ibori fled the country after Tuesday's futile attempt by a combined team of the EFCC and the police to arrest him in his country home in Oghara, Ethiope West Local Government Area of Delta State.

The team which was led by a Deputy Inspector-General of Police, Mr. Udom Ekpoudom, retreated when it was attacked by armed youths, suspected to be militants.

Some reports had it that Ibori sneaked out of the country on either or Wednesday or Thursday to a neighbouring West African country while others said he was moved to Dubai, United Arab Emirates, where he is believed to own a luxury home.

Our source said, 'We have the report that the former governor has fled the country to evade arrest by our operatives. There are conflicting reports about the country where he has relocated to. The initial report we have was that he has moved to a West African country.

'The management of the EFCC is optimistic that the undercover agents should be able to gather credible intelligence report to ascertain his exact location outside the country.

'Thereafter, we are going to seek the help of the INTERPOL to track him down.'

When contacted on the telephone on Sunday, the Head of Media and Publicity of the EFCC, Mr. Femi Babafemi, confirmed that the commission was in possession of an intelligence report that Ibori had left Nigeria.

But he added that the agency was exploring all avenues within and outside the country to apprehend him to face justice.

Babafemi said collaboration with the INTERPOL was one of the options to get Ibori back in the country.

'We have the report that former Governor Ibori has ran out of the country and we may likely contact the INTERPOL for assistance to get him arrested,' he added.

Ibori's latest travail followed a petition to the EFCC by a group, Delta State Leaders, Elders and Stakeholders Forum, led by a former Minister of Information, Chief Edwin Clark.

The DSLESF had in its petition alleged that Ibori sold millions of shares belonging to the Delta State Government and used the proceed to purchase an American oil servicing firm, Wilbros, during his tenure as governor between 1999 and 2007.

Despite the ongoing legal action instituted by the embattled former governor to extricate himself, the commission declared him wanted and launched manhunt for him.

However, our source in the EFCC stated on Sunday that the authorities of the commission had concluded plans to seek the assistance of the INTERPOL whenever the location of the former governor was determined by its undercover agents.