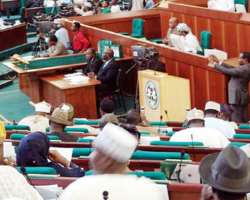 The Senate President as an avid user of modern technology and new media platforms knows what advantage the online community serves to the members of the 8th assembly.

Participatory governance in solving our national problems involves slow, difficult negotiations to seek agreement among the three tiers of Government and the citizens. With this, the use of social media puts legislators, organizations, citizens and journalists in touch with each other through simple Question and Answer processes that are facilitated by the use of Internet.

Lawmaking, oversight over the executive, budget appropriations and representation are the major functions performed by the parliament. In performing these functions, they majorly serve the categories of the stakeholders, the public, members of parliament (MPs), and staff. In addition to these stakeholders, various government institutions and independent institutions such as councils, ministries etc interact with parliament on regular basis. All these stakeholders have different needs at different level of intensity.

With the advancement of globalisation and technology, parliament is faced with several challenges in terms of providing services to its stakeholders. For example: the public now expects more transparency in parliamentary practices and faster responses to their queries using Internet technology. Here in Nigeria, there have been a strong calls to the Senate President through an online campaign on twitter "#OpenNASS" to make the parliament transparent, accessible and accountable.

These calls are the reason the Senate President has set into motion the use of e-parliament (which is the use of information communication technology (ICT) by elected representatives, their members and political and administrative staff, in the conduct of their tasks, actively involving its citizen) in the 8th assembly to bring the electorate more closer to the parliament through the use of various technological tools which are readily available in the hands of million on Nigerians.

The 8th Senate has committed it members of parliament to interact with the people now than ever on anytime, anywhere basis for various informational and collaborative needs. The birth of new media has changed the landscape of information gathering and sharing which has provided people with real-time information even in the comfort of their homes.

The potential benefits of a strong parliament to the electorate and representatives is that it will bring about:

With these aforementioned benefits, the call for an "#OpenNASS" will be met.

Before this call for OpenNASS, MPs and the public have to rely on ineffective methods to access parliamentary information such as publications of Acts and Amendments of Acts, irregular committee reports and financing sheets. MPs have to submit petition, motion, questions to parliament in person and the only way to monitor an ongoing bill, Motion is by contacting relevant staff.

Everyone involved in policy-making needs good ideas. One good idea can make all the difference. One bad idea can be disastrous. Whether in government or opposition, legislators and political parties all need to be on the cutting edge of policy.