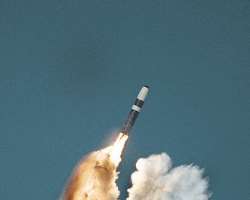 “Iran, with foreign assistance (North Korea), could have the ability to

strike the U.S. homeland with an intercontinental ballistic missile(ICBM) by 2015,” said Riki Ellison last Friday in Washington. Ellison is the Founder and Chairman of the Missile Defense Advocacy Alliance (MDAA).

He was commenting on the Senate Armed Services Committee hearing held on Capitol Hill Wednesday April 21, 2010.

The purpose of the hearing was to receive testimony on ballistic missile defense policies and programs in review of the Defense Authorization Request for Fiscal Year 2011. Ellison is one of the foremost lay experts in the field of missile defense. Ellison's comments include the following statements:

The following is the complete statement made by Riki Ellison.

"Over the past week, Congress held three public hearings on missile defense plans for 2011 and beyond. Hearings were held by the Strategic Forces Subcommittee of the House Armed Services Committee, the Senate Armed Service Committee led by Chairman Carl Levin (D-MI) and the Ranking Member John McCain (R-AZ) on Tuesday and most recently the Defense Subcommittee of the Senate Appropriations Committee led by the Chairman Daniel Inouye (D-HI) on Wednesday.

"During these hearings, the testimony of President Barack Obama's appointees in the Department of Defense and the Director of the Missile Defense Agency, Lt. Gen. Patrick O'Reilly, exposed five fundamental elements of the administration's missile defense plan:

1. Iran, with foreign assistance (North Korea), could have the ability to

strike the U.S. homeland with an intercontinental ballistic missile

(ICBM) by 2015.
2. In the current administration's plan, the Phased Adaptive Approach

(PAA), there will be a second shot capability based in Europe to defend

the U.S. homeland from an Iranian ICBM in 2020. This is dependent on

the development, testing and deployment, of a new SM-3 Block 2B missile

and the integration that allows for early intercept by launch and

engage on remote sensors including basing Aegis Ashore platforms in

Europe.
3. The administration's current missile defense plan for the defense of

the U.S. homeland is to rely on 30 Ground-Based Interceptors (GBI's),

26 based in Alaska and 4 in California until 2032. They would provide

protection against a maximum of 15 incoming ICBMs, using two GBIs per

ICBM with a shoot, look, and shoot doctrine. Due to distance, parts of

Eastern United States will not have the same confidence of protection

as the remaining U.S. Homeland from an ICBM threat from Iran.

4. There is a gap of protection and vulnerability against an ICBM launched

from Iran at the U.S. homeland, especially to significant parts of the

east coast, for a minimum of 5 years in the President's plan for

5. In regards to a hedge for the existent gap in protection from an ICBM

adding 8 more GBIs to the existing 30 GBIs,
-- Testing the two-stage GBI, the missile in June of this year, the

same missile system intended to be deployed in Poland for the

canceled 3rd site of the previous administration.
-- Having additional shot opportunities, against an ICBM from Iran,

with two-stage missiles.
"The recent Congressional hearings on missile defense have made it abundantly clear to the American public that a gap exists in the missile protection of the U.S. homeland against Iran. It is also apparent that the administration's plans to develop and deploy a hedge to fill that gap have not adequately been addressed. The administration needs to move forward with urgency for a robust testing and deployment plan of the two-stage GBI on or before 2015 to ensure full protection of the U.S. homeland from Iran.

"The protection of the U.S. homeland from ballistic missiles is the declared and stated number one priority of President Obama's administration missile defense policy."