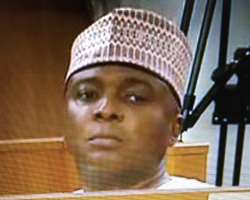 Senate President Bukola Saraki has arrived the Code of Conduct Tribunal where he is facing charges of alleged false asset declaration and corruption.

Mr. Saraki’s bid to thwart the trial failed after the Supreme Court ruled that the tribunal had powers and was properly constituted to hear the case against Mr. Saraki, a former governor of Kwara State.

Last Friday, the tribunal adjourned the case by a week.

The tribunal took the decision after Mr. Saraki’s new lawyer, Kanu Agabi, asked the judges to rule first on the senate president’s objection to the powers of the tribunal to try him.

Mr. Saraki arrived the tribunal at 9: 54 am on Friday.

His counsel, Mr. Agabi, said there were 80 lawyers on his team, saying his client would surely emerge winner in the event of a voting contest.

The prosecution lawyer, Rotimi Jacobs, said the defence team had served him with a notice of a motion requesting that the charge be quashed.

He said based on the Administration of Criminal Justice Act, the new application was not ripe for hearing.

Mr. Jacobs said the sections clearly state that such objection shall not be raised.