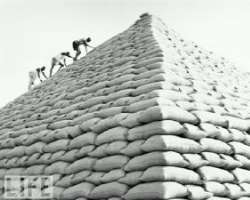 According to the governor, it is for this reason the state government is providing the environment that will encourage the massive production of rice, wheat, and tomatoes.

He said the state government would provide rice farmers with the incentives they would need to be able to increase the production of the product.

Now, we are soon going to talk about rice pyramids not groundnut pyramids because rice is the order of the day now.

The groundnut you are talking about in those years it was the production of groundnut to be exported to the foreign land and be processed and be brought back to Nigeria.

But now it is a different issue. We have a lot of oil mills that consume the groundnut. So, you will not expect to see the groundnut pyramids as you used to see because the economic situation has change.

The industrialisation is much better than those days.

So, you better stop dreaming of groundnut pyramids now. But when you are talking of rice that is where we need the pyramids now.

So, we assure you that in Kano we are providing an enabling environment for the production of rice, wheat, and tomatoes, which withing a short period of time God willing you will see it.

The governor said that during the meeting, he brought the President up to date with the security situation in the state, particularly the issues relating to cattle rustling and kidnapping.

According to him, cattle rustling and kidnapping have been brought under control.

I briefed the President about the security situation in Kano, in particular cattle rustling and kidnapping which is under control.

We talked about the amnesty package extended to those that have decided to be born again and the empowerment programme for them and how we are helping the police in order to controle the situation.

So, Kano State is providing an enabling environment for farmers, cutting off the middlemen the farmers are getting the best out of it.

The governor revealed that the state security apparatus has so far recovered more than 10,000 stolen cattle and returned them to the rightful owners free of charge.

He said that 39 repentant cattle rustlers were being rehabilitated in the state.

We granted amnesty to those who decided to quit crime. 39 of them came forward to surrender all their arms ammunition, including AK47, with hard drugs like Indian hemp, cocaine and others.

We are planning an empowerment scheme for them, so as to make them busy for committing crime again.

On the row between him and Kwankwaso, Ganduje stated that the situation is under control, saying that efforts have been intensified to address the problem.

Yes, reconciliation is ongoing and it will work. We have been together for long we are politically brothers and friends.

Therefore, we will make sure that we don’t allow things to continue to fall apart, between us again