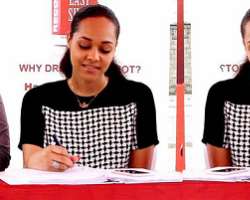 Wizkid's on and off side chick, Tania Omotayo, is having a good time of her life as she will not have to sit and wait for her boyfriend to credit her account before she can buy anything for herself.

Tania turned socialite has just bagged an endorsement deal as the new face of Last Shot energy drink company which is in the Nigerian market to add value to healthy living.

She was unveiled the ambassador of the drink on Tuesday March, 15, 2016 and she is so happy to have gotten a bank alert showing her bank details has been boosted all thanks to the new deal.

Tania for a while now has not had it smooth with her singer boyfriend especially with a fresh allegations which emerged some months back of the singer fathering another child from another woman while leaving her hanging.