Agatu Massacre, The Police And The Tragedy Of A Peace Talk 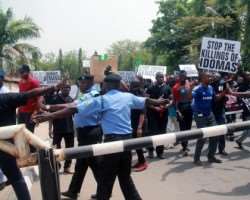 The recent massacre of the people of Agatu in Benue State by suspected Fulani herdsmen has left a very sour taste in the mouths of well-meaning Nigerians. What baffles a lot of Nigerians more than the actual killings was the pussyfooting with which the authorities have reacted to the issue.

In a situation where innocent and defenceless Nigerians including hapless women and helpless children were massacred in such a large number, brazen notoriety and in one fell swoop that should have attracted a massive, definitive and relentless manhunt for the perpetrators, smoking then out from their hiding places from where they carry out their heinous attacks on sleepy communities without provocations, and make them face justice for their crimes.

But that would only be if the incident did not happen in Nigeria, because in Nigeria, after such pogrom against a people, the perpetrators are invited by the country’s chief police officer to a “roundtable peace talk” as ordered by the president.

As it was in the case of Agatu, the leader of the cowardly Fulani herdsmen would appear before the Inspector-General of Police and sound bullish while reeling out reasons why his men had to kill harmless Nigerian citizens in their hundreds. He would say that the people of Agatu killed their cows and therefore must pay with their blood, their lands, churches, schools, houses etc. He makes the IGP understand that the herdsmen are a law unto themselves, a people who must not report to the police about those who they suspect were killing their cows.

The tragedy of the whole episode is that after the “peace talk”, the leader and his delegation walked away from that meeting without being arrested, interrogated and or prosecuted. No one, not even the IGP dared to ask them about the source of their weapons.

It is unbelievable that the Fulani herdsmen were not questioned about their weapons nor were the weapons seized. The IGP allowed them to go home “and sin no more” with a pat on the back while they could continue keeping their weapons much enough to overrun a whole community and remain fully armed to the teeth, as, in the estimation of the IGP, that is the only way the Agatu people and the herdsmen can live in peace together.

What a country!
Is it then any surprise that just days after the Agatu massacre, the herdsmen marched down to Ngorukgan, Tse Chia, Deghkia and Nhumbe all in Logo Local Government Area of the same Benue State, hacking down anyone in sight?

As if that was not calamitous enough, these same blood-thirsty and inhuman Fulani herdsmen had the temerity to attack the convoy of Senator David Mark while the senator was in Agatu on a solidarity visit and fact-finding mission. This is in spite of the fact that the Distinguished Senator had security cover and armed security personnel in his entourage who, of course, returned fire for fire.

The most tragic of all is that in his recent visit to Minna where he held a stakeholders meeting with the people of the area, the Inspector-General of Police mindlessly claimed that the number of victims in the Agatu killings had been exaggerated. Hear him: “I was around; I travelled to Makurdi, I did not see where 300 people were buried...If you kill, you don’t just bury; you must take the corpse to the police station before you bury. We don’t have that number of people”. Yet our IGP failed to give the number of casualties he has. Who is deceiving who here?

This is most disgraceful coming from the nation’s number one police officer. The approximate driving distance from Agatu to Makurdi is 239km, a journey of about 4 to 5 hours. With such great distance, one wonders how the IGP reached his contrived conclusion that he did not see where 300 people were buried. How could he see when he stayed in the comfort of the state capital and nowhere near the theatre of pogrom? Was he expecting the Agatus to take their dead through that great distance to bury so he could see them?

Was the IGP expecting the Agatus who fled the scene of massacre in all directions and are today taking refuge in places other than their homes to have the luxury of time to collect their dead and bury when even those alive to bury the dead are still scared stiff to go back to their communities? Was he expecting them to first carry the dead to the police station that was also not spared by the Fulani militia who burnt every building in sight including Arase’s police station in Agatu?

If we must call a spade a spade, this is quite shameful and painful! Haba, Mr Solomon Arase, this is most unexpected of you!

Apart from this, there are still many questions for the IGP to answer! Why did he not get to Agatu to see things for himself? What was he afraid of? Why did he choose to see things 239km away without binoculars? He could as well have remained in Abuja and still get reports from the field.

Contrast this to the report of Senator David Mark who braved the odds and visited Agatu even though he still came under heavy unprovoked attack by the Fulani herdsmen, and one would discover the needless copious discrepancies between their reports, one coming from the field and the other from outside it.

On getting to Agatu, David Mark had lamented the barbaric actions of the Fulani herdsmen who, in any case, have been rated the fourth most dangerous terrorist group in the whole world by the Global Terrorism Index. He said “I’m shocked beyond words at the extent of destruction I have seen here in Agatu today. This is unbelievable. It is unimaginable. Nothing whatsoever justifies the brazen act of destruction meted out to the people of Agatu. My heart bleeds”. The difference is clear.

What one expects after such level of destruction is not “peace talks”. One expects the police and other security agencies to swing into action and bring the perpetrators to book. Anything short of this amounts to complicity, negligence, cowardice and injustice to fellow citizens wickedly hacked down by a wicked lot.

The IGP’s failure, neglect or refusal to arrest the leader of the Fulani herdsmen who knew everything about the attack from his narrative in that meeting and order the seizure of all the weapons of the militia is criminal in itself, and the IGP has a lot of explanations to do to Nigerians. The failures on the part of our security agencies have made the herdsmen grow bolder to spread their deadly attacks to other parts of the country. This is most unfortunate!

While those who embark on peaceful protests without any arm in the South are mowed down by security agents, the Fulani herdsmen who murder people in their hundreds in the Middle Belt and other places are invited to “peace talks” by the same security agents. What a tragedy!

Since the authorities have proved to be powerless in this matter, the least we owe those murdered in Agatu and other places is to continue to cry for justice on their behalf so that we are not caught in the web of inadvertent complicity in a crime committed by a felonious lot.