Ganduje In Kwankwaso's Shadow Like Shettima In Sheriff's Shadow 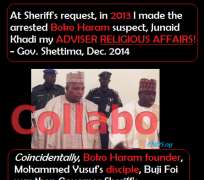 One of the worst predicaments is to be in the shadow of someone with a well built powerful reputation, be it in good or in bad. It's the worst thing imaginable to follow behind a leviathan, especially if you are a politician with unending ambitions. Lord, I hate politics.

Kano Governor Ganduje is suffering just that. No one can ever deny or dispute the reputation of Kwankwaso in Kano, called the father of the modern Kano. Red-hat Kano and the Kwankwaso or Kwankwasiyyah phenomenon is one that will remain in Kano's history for ever. His ability to easily, roundly defeat the fanatic Shekaraus and deliver a stellar victory to Buhari and also easily make his deputy, Ganduje his successor, gives an idea of Kwankwaso's political power and reputation in Kano and beyond.

Don't Fight It, Embrace It
Ganduje has been having a hard time walking in his shadow. People always tell him, "that's not how Kwankwaso does it." The governor simply can't take it and you cannot blame him. Where you may however question his method is in him resorting to the Shettima-Sheriiff all too simplistic strategy of fighting your benefactor. Why not protect his narrative as a friend while building your own in tandem?

In any case, Ganduje is fighting Kwankwaso and the fight is getting disgusting. In the latest press releases the current Kano governor and former deputy under Kwankwaso is threatening to soil Kwankwaso's reputation by "revealing" Kwankwaso's “misdeeds and betrayals.”

What the Kano governor fails to realize is that unless his exposé is of the nature of revealing Kwankwaso's "extra-marital" misdeeds, or his "smoking and drinking" habits or other possible moral weaknesses, any other "administrative" thing Ganduje "exposes" about Kwankwaso will expose Ganduje himself.

It is precisely what happened with Shettima and Sheriff. The more Shettima, former Commissioner of the Borno State Ministry of Finance and Economic Development under Sheriff, "exposed" his boss and benefactor, the more Shettima got exposed as an equal in plundering Borno's wealth and aiding terror.

It is the same way that Obasanjo and Jonathan, his god-son knocked each other out.

It would be advisable that for administrative errors, Ganduje files a report with the EFCC. That would be in the best interest of Kano State.

We, most especially those of us who love gossip, are anxious to see this filthy and irritating typical public demonstrations of the best of western demoncrazy play out so we can see the dirt on their nyashes.