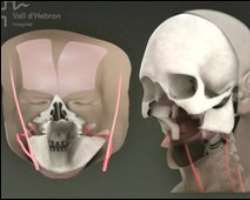 A team of 30 Spanish doctors say they have successfully performed the world's first full face transplant.

A man injured in a shooting accident received the entire facial skin and muscles – including cheekbones, nose, lips and teeth – of a donor.

The man is recovering well after the 22-hour operation, said a spokesperson from Vall d'Hebron University Hospital.

Another 10 face transplants have been carried out around the world, but this is believed to be the most complex.

“There have been 10 operations of this kind in the world – this is the first to transplant all of the face and some bones of the face.”

The man was operated on in March, but details of the operation have only just been revealed.

He had been left unable to breathe, swallow, or talk properly after an accident five years ago.

He was considered for a full face transplant after nine previous operations failed.

A team of 30 experts carried out the operation on 20 March at the hospital in Barcelona.

The man has since seen himself in the mirror and was calm and satisfied, the leader of the medical team, Joan Pere Barret, told a news conference.

'Achievement'
The first partial face transplant was carried out by doctors in Amiens, France, in 2005.

Isabelle Dinoire, a 38-year-old woman who had been mauled by her dog, received a new nose, chin and lips.

Since then partial face transplants have been carried out in China and the US.

British experts say the Spanish operation may be the most complex yet.

It appears to include more bone and much more of the lower part of the face.

A spokesperson for the UK's Facial Transplantation Research Team, which has ethical permission to carry out a full face transplant, said it was “a tremendous achievement”.

“This appears to be the most complex facial transplant operation carried out so far worldwide,” he said.

“It once again shows how facial transplantation can help a small number of people who are the most severely facially injured and for whom reconstructive surgery cannot and has not worked.”

HOW SURGEONS REBUILT PATIENT'S FACE
1. Patient lost jaw, nose and other parts of his face in shooting accident.

3. Donor's nerves, blood vessels and skin connected to patient. Patient will have to take anti-rejection drugs for the rest of his life.