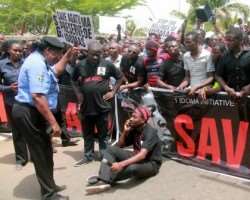 In a government press release published in virtually all Nigerian media which shows the strength of the authority, the Shia Muslims of Nigeria were blamed for the Agatu massacre of over 500 Benue people which has been in process for over 2 years. The massacre has been headlines because it was allowed to continue without the Nigerian security departments making a single arrest of the Fulani herdsmen-terrorist, Boko Haram perpetrators or otherwise seriously acting to abate it.

Protests in Abuja on the ongoing genocide embarrassed the reluctant government that is still yet to act. Finally David Mark's visit during which he was even allegedly shot at, and he described the numbers of victims and how 10 communities were wiped out in typical Boko Haram style, forced a reluctant government to announce it will act.

This is a shocking replication of how former Nigerian President Goodluck Jonathan blamed the north and later Muhammadu Buhari for Boko Haram. Did the new government copy such sick behavior from his books? Where did it get him?

As time went on, Jonathan even left Boko Haram to fester while maximizing his political capital and financial reward from the mayhem of the terror group.

As Nigerians sit and watch the same accusations of millions of innocent people for the acts of others and the inactions of the government in abating the terror, we might just get to the point like in the past where the government actually promotes ("Boko Haram is fighting for Justice" – Bamanga Tukur; "they are our siblings" – Jonathan) and intentionally tolerates such terror and genocides as a means of defending itself and persecuting those it battles. Hopefully we have not already gotten to that point, considering how the government has refused to bring any of the Agatu terrorists to book and seriously act against it.

All our analysts have a terrible forecast of the long term implications of the unholy game Nigeria's security chiefs are playing in persecution of the Shia Muslim while openly aligning with the Saudi monarch.

A High Court Judge just warned them to stop terrorizing Nigerians by acting as though they were above the law and like illiterates.

This is a call on all serious minded and conscientious Nigerians who care about the future of Nigeria to act now and stop the ongoing unfair targeting and persecution of a religious minority in the nation. The implications will be more deadly than they already are. We must call on the army to #ProduceZeenatAndZakzaky. As the army claims that it killed only 7 members of the movement, perhaps Zakzaky's three sons, his sister-burned-to-death and just 3 others; the army should allow the victims defend themselves from a case that simple.

The continued full blown media propaganda activities to malign and now associate a 10 million large minority religious group in the country is being observed by the world to our disgrace, and is certain to wreck whatever we build in Nigeria both locally and our international reputation, as has happened in the past.

Nigeria is willingly setting itself up to be the newest field in a dirty, deadly sectarian crises that has totally destroyed the Middle east. We must not be looked at as such an extremist and notorious country with clear government sponsored harassment and libelous, defamatory projects to ethnic and religious minorities.

We must also not take the patience of the Shia Muslims for granted. While the world appreciates their extreme patience in the face of such levels of persecution, including the killing of six sons of their leader, burning his sister to death, shooting him and his wife several times and beating them up, killing their sons in their faces, burning their homes and properties down with everyone in it, demolishing all their property and going as far as exhuming graves of Shia Muslims and dumping the bodies in mass graves in a "honor killing" pogrom that claimed as many as 1000 lives with an official list of 800 missing....and then as it stands, kidnapping Zeenat and Zakzaky for over 90 days denied all constitutional access to legal representatives, family and medical visits; we must realize that every material has its Youngs modulus and elastic limit.

We call on Nigerians to act and fight for justice and caution of the "dictator" authorities as Justice Yusuf Haliru tagged it, as we continue to pray.

Psalm 10:17 Lord, you have heard the request of the oppressed; you make them feel secure because you listen to their prayer. 18 You defend the fatherless and oppressed, so that mere mortals may no longer terrorize them.