NNPC did not remit N3.2 trillion to Federation Account in 2014: AGF 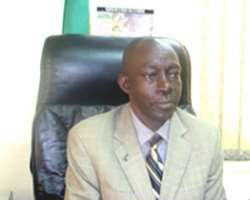 The Auditor-General of the Federation, Mr Samuel Ukura, on Monday in a report to the National Assembly detailed what it called 'massive fraud and financial irregularities in the NNPC and government agencies'.

Ukura told the Legislators that the Nigeria National Petroleum Corporation did not remit N3.235 trillion to the Federation Account Allocation Committee in 2014, and that the proceeds from the sale of gas to Nigeria Liquified Natural Gas, NLNG, to the tune of $235,685,861 was not paid to the federation account.

He made the presentation while meeting with the clerk of the National Assembly and reporters on Monday in the Abuja, Nigeria's capital.

According to the AGF, the money was curiously transferred to what he called “some undisclosed escrow accounts.”  He also disclosed that “the sum of N36.4 billion was released to the Office of the National Security Adviser, NSA, for the rehabilitation and construction of dams instead of the Federal Ministry of Water Resources.”

The report detailed how payments amounting to N73 billion was made from special funds to various government agencies.

One of such was the sum of N36.4 billion meant for construction of dams, which was released to the Office of the National Security Adviser in 2014, instead of the Federal Ministry of Water Resources.

The report further disclosed that personal advances were granted to 112 staff from recurrent vote and 50 members of staff from general service vote totaling N1.1 billion from July to December 2014.

In addition, N9.5 billion worth of payments were made by the management of the National Assembly without raising payment vouchers, which is a violation of financial regulation.

Other agencies allegedly caught in the web of fraud by the Office of the Auditor-General of the Federation were the Police Service Commission, foreign mission, Nigeria Port Authority (NPA), Petroleum Equalisation Fund (PEF), Nigerian Prison Service‎ and Federal Airports Authority of Nigeria (FAAN).

Ukura, who presented a copy of the report to the Clerk of the National Assembly, Alhaji Salisu Maikasuwa, for onward presentation to both chambers, gave highlights of how moneys were diverted or spent by MDAs during the period under review.

He said said however that “relevant documents were not made available for verification.” The report also indicated that acquisition and payment of N3,630,000,000 property was made without a Certificate of Occupancy,C of O.

It was alleged in the report that a total payment, amounting to N73.55 billion was made, contrary to established purpose of the funds. “The sum of N2,894,531, 250.00 was spent for the procurement of hand sanitizers for schools and critical public places. The sum of N31,324,952,239.87 was for payment of subsidy on fertilizer and youth employment in agricultural programmes. The sum of N2,395,851,978.00 was payment for group Life Assurance Premium for Armed Forces budget in 2013, but not backed. The sum of N500,000,000 was made as payment for agricultural programmes.

“These were variances with the purpose of the fund. No evidence of these lines of expenditure in the 2014 Appropriation Act,” the AGF revealed. According to the AGF, the management of the National Assembly violated the nation's financial regulations.

In the audit report, the AGF revealed how the Embassy of Nigeria in Washington, D.C., United States of America, realized Internally Generated Revenue between 2012 and March 2015, but expended the whole amount on sundry expenses, adding that they stood at $3,705,428.00.

The audit report indicted the leadership of the Nigerian Prisons Service as according to the AGF in the report, Pay As You Earn, PAYE, tax of N2,036,758,176.75 was deducted and said to be remitted to Federal Inland Revenue Service.

According to the report, there is no evidence of remittance and nothing was produced for audit confirmation.

On the menace of ghost workers in Nigeria, Ukura said the embarrassing syndrome of ghost workers would continue in Nigeria, if the current management of the Integrated Personel Payroll Information Systems was not immediately checked by the appropriate authorities. He alleged that unidentified staff of Soft Alliance Limited, the software developers, have unhindered access to the database and usually set up new users and change live data from time to time.

He said his office, as a result of the anomalies, discovered that about N330 million was paid to 300,000 people without following approved salary scale, while double payments of about N30 million was made within three months.

He added that the imperfections in the IPPIS system had made the country lose huge sums of money, with the payment of N12 million each to 40 members of staff who were not included in the payroll of the relevant MDAs. He said 152 officers on IPPIS did not have personnel files in their MDAs, while N193m was paid to unidentified persons. Besides, he explained that N1.163m was paid to 596 employees with income tax deductions from April 2012 to September 2013 and that 2, 000 employees had no pension deductions.