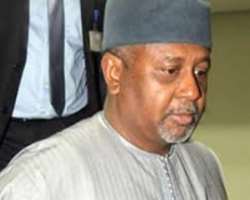 Justice Yusuf Halilu gave the order in his judgment in a suit filed by Ashinze for the enforcement of his fundamental human rights to personal liberty.

Ashinze had been in detention since December 23, 2015, in relation to the ongoing investigation into alleged diversion of funds meant for arms procurement under the past administration.

Justice Halilu ruled on Monday that Ashinze's detention for over three months without trial, was “‎illegal, wrongful, unlawful and constituted a blatant violation of the fundamental rights of the applicant”.

The judge also ordered the immediate release of documents and items the anti-graft agency seized from the house of the applicant.

He ruled that although, fundamental human rights enforcement proceedings were not meant to be an escape route for suspects of crimes, they were to help in containing the excesses of government agencies.

Justice Halilu, however, refused to grant a perpetual injunction restraining the EFCC and other respondents from further arresting the applicant.

The judge also refused to grant the N500m sought by Ashinze as compensation for his unlawful detention.

“The respondents, I must be bold to say- the EFCC and the Army- have behaved like illiterate.”

The judge held that by virtue of section 36 of the 1999 constitution, as amended, an accused person was deemed innocent until proven guilty in a competent court of law.

Justice Halilu also asked, “Why has the 1st respondent kept the applicant without bringing him to court? Why was the applicant, being a serving military officer, who could be easily reached, not granted administrative bail? Or is it that the applicant has been found guilty and already serving his jail term?”

He added, “Nobody should be subjected to the whims and caprices of the EFCC. The essence of the rule of law and constitutional provisions is to ensure a just balance between the ruler and the ruled, between the powerful and the weak.

“Though the EFCC has the responsibility to investigate financial crime, it must however conduct its operations in accordance with the rule of law.

“The court is empowered to guard against i‎mproper use of power by any member of the society or agency, EFCC inclusive.

“The detention of the applicant, for all intent and purposes, is not just unfair but unfortunate.”