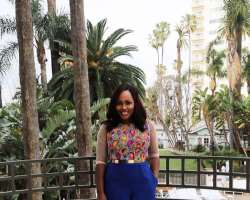 Lagos|Nigeria,:Uche Pedro, Adele, Jennifer Lawrence, Justin Bieber, Sofia Vergara, Will Ferrell, Amy Poehler, Zendaya,The Voice, SpongeBob SquarePants, Fifth Harmony and more were among those who won coveted orange blimps at Nickelodeon’s 2016 Kids’ Choice Awards (KCAs) on Saturday 12 March. Hosted by country music superstar and coach onTheVoice, Blake Shelton, the awards were broadcast from the “Fabulous” Forum in Inglewood, California, as kids from all over the world celebrated the best of everything they love in pop culture.

Commented Uche Pedro, “Wow! This is such an amazing moment for me and the BellaNaija brand.

Thank you to my husband Bode, our wonderful children and our families. BellaNaijariansand BellaNaijateam - we made it! Thank you for all the votes and positive vibes. Thanks Nickelodeonfor the opportunity and to my fellow nominees, you are an inspiration! To everyone out there with a dream, this is a testimony to never give up, be a rebel with a purpose and vision.”

This year's festivities kicked off with Shelton getting hosting pep talks from celebrity friends including Adam Levine, Pharrell Williams, Nick Jonas, Selena Gomez, Chewbacca and BB-8. After being alerted that the Stormtroopers were trying to take over the 2016 Kids’ Choice Awards,Shelton jumped into action and battled his way onto the show stage via a super-charged chair from The Voice.

During the show, singer-songwriter Charlie Puth and hip-hop star Wiz Khalifaperformed a medley of “One Call Away” and “See You Again”, right before taking home the blimp for “Favourite Collaboration”. Rapper Silento appeared the night of Kids’ Choice Awards to sing his mega-hit “Watch Me (Whip/Nae Nae),” and DNCE closed the show with a performance of their chart-topping single “Cake by the Ocean” that culminated with an ultimate slime dousing of the audience.

The 2016 Kids’ Choice Awardsproved to be a mega slime fest, from kids in the audience awardingShelton with an epic finale sliming, to Jace Normandumping a bucket of green goo on John Stamos, toFifth Harmonygetting drenched after their win for Favourite Music Group, and Shelton welcoming Jason Sudeikis and Josh Gad to the green side.

This year’s show put the power of choice in the hands of kids at home with an interactive digital experience like never before. Kids had the opportunity to choose what happened live during the show by casting votes to see four different outrageous moments play out: Shelton and Normanpranking DNCE with toilet paper in their dressing room; CameronDallasgetting super soaked in slime; Shelton donning a unicorn outfit; and the stage environment changing to underwater.

In addition to the live votes, Nick's digital platforms offered games and exclusive real-time updates with photos and videos from the Orange Carpet and backstage. From Facebook to Snapchat and everything in between, Nickelodeon'ssocial channels captured all of the best snaps, memes, GIFs, videos and pics from the night.

The 2016 Kids’ Choice Awards will be seen in more than 180 countries and territories around the globe. Within hours of airing live in the United States, Canada and Australia, the show will roll out in internationally giving kids around the world the opportunity to tune into their local Nickelodeon channel to enjoy the show. In many international markets, the 2016 KCAs will featured country-specific award categories and nominees such as Best Blogger – Africa, UK’s Favourite Tipster, and Estrella Latina Favorita (Favourite Latin Artist). Voting spanned six continents across local Nickelodeon websites and Twitter hashtag voting (#KCA), giving kids practically everywhere the chance to decide who takes home a coveted blimp.

ABOUT NICKELODEON
Nickelodeon, now in its 36th year, is the number-one entertainment brand for kids. It has built a diverse, global business by putting kids first in everything it does. The company includes television programming and production in the United States and around the world, plus consumer products, online, recreation, books and feature films. Nickelodeon’s U.S. television network is seen in more than 90 million households and has been the number-one-rated basic cable network for 20 consecutive years. For more information or artwork, visit http://www.nickpress.com . Nickelodeon and all related titles, characters and logos are trademarks of Viacom Inc. (NASDAQ: VIA, VIAB).