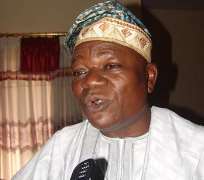 Sometimes I feel as advanced as science is I feel science is still grossly deficient and limited. Or how do we explain all the advancement in space and stellar technological conquests yet death seems to still have its way stealthily walking in and at its exit a compatriot would be in its trail leaving tears, sorrow and wailings as our companion. It's so sad.

How helpless humanity is still, in spite of our victories in space travel, in vitro fertilisation, heart transplants, graftings, cloning processes yet we have not conquered death. Even in faith except in the bible days our later day faith has not sufficiently been good enough to reenact the miracles of restoring life to Jairus daughter and Lazarus.

How helpless and limited we all are. So we resign to fate and awaiting who is next, no wonder Ebenezer Obey in one of his evergreen sang thus "...E ma forun yomi oo gbogbo wa lan lo.... and Yorubas are fond of the saying that ..."orun dede ma kanju gbogbo wa la mbo". It's often said this is one debt we all owe, be you a politician or a pastor, Forbes rated Dangote or unknown Dare in one innocuous corner .

As I ponder in my disconsolate state I remember my times with Ambassador Gbenga Olofin and hot thread of tears flowed freely. This is coming too soon after the death of three close persons, first Hon Minister of Labour and Productivity, the gentle giant and goid hearted man in the same circumstances as Egbon Gbenga Olofin, and closely following is the death of my friend Sola Salako's mum, though more elderly but I would not still feel she's ripe enough to be harvested by the ultimate jack the reaper. A soft spoken and amiable woman, and a few hours ago, Ambassador Gbenga Olofin.

It's a case of glaring helplessness. I remember like yesterday that call one morning in 2015 ahead of our elections . We were seeking re election and he was running to succeed Bro Femi Ojudu in the Senate having opted not to run. In his baritone voice he said, 'Hon mo n gburo yin ni north oo, mo fe ke wa ka soro how we will cage what would appear as a rampaging well oiled machinery been rolled against any APC .'

He ended by, 'eje Kari ra' I didn't think too much of the telephone conversation before I asked that somebody should tell me more about him . I was told he was until lately in PDP. And my take was that another money bag person is here. Well my own interpretation about leaving a party that you had good romance with , where you wanted to contest and to later decamp and immediately out to want to contest election, to me is not a mark of honour.

Because we have seen people who decamped into one party for prospects in the morning and opt out again at night fall. However that's my own impression, So when I met him eventually he gave an impression of a very sound man, and desirous of doing good, and I made up my mind in my own little space to work for his seamless introduction and absorption. Well Egbon had critically done a lot of work to earn himself a secured place among party's faithfuls.

Today I have come to celebrate a calm and focused achiever and a man too composed.

The reality of your departure evokes pains of indescribable proportion, and I'm sure your wife and children and family members are the worst hit and of course your sincere constituents . As we get ourselves together to accept this crude blow of death, I want to say my condolences to the entire family and pray that ''Olorun a te egbon si afefe rere''.. May his gentle soul rest in perfect peace.

You have ran a good race Egbon, and fought a good fight, yours is not a wasted life, history will be fair to you when your political trajectory is chronicled. Ask not who the bell tolls, it tolls for thee. Goodnight my Egbon and hopefully " a o pade leti odo......" sunre oo.