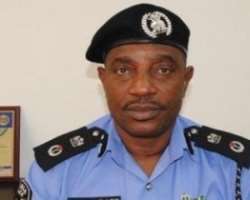 A helicopter that all but landed before climbing off immediately has triggered suspense and security concern in Opialu Village in Edemoga District of Okpokwu Local Government Area of Benue State. The security siege mentality in the highly populated village is not unconnected with the widely held belief that the appearance of a similar helicopter preceded the recent mayhem in Agatu District, also in Benue State. Two ocupants of the helicopter which barely touched the grounds of the St Theresa LGEA Primary School at Opialu about 5 pm on March 10th, 2016 waved on-lookers, mainly pupils playing football on the mission ground. But it did not land, although it was close enough for the observing pupils and others who ran towards it to observe that one of the pilots wore an orange dress. There were only two persons in the helicopter.

An eye witness account said it tried to land twice. It came so close and then zoomed off, went as if to one of the nearby villages before coming back. It was at this point the pilots waved to the pupils. But there is no consensus about the color and registration number of the plane. While Chief Emmanuel Onuh, the Chairperson of the Opialu Community Development Association told the Divisional Police Headquarters at Okoga that ash color was reported to him, other members of the powerful youth association insisted it had navy blue colour. There has been an obvious confusion over color among the observers in the same way as the registration number was unclear. While the pupil mature enough to take any such number sticks to AB/ANA, one person who is though more educated claims it was written AB-ANA. No one reported seeing any number on the registration, prompting speculations that the helicopter must be one of the de-commissioned aircrafts, either of the Nigerian Air force or one of the charter companies.

Daniel Ojo, the Divisional Police Officer in charge of Okpoga, the headquarters of the Okpokwu Local Government Area did not pick his phone the one or two times it rang after several attempts on Sunday afternoon but police sources at Okoga confirmed a report to the station on the strange helicopter. The police said it had put the community on the alert while warning against taking the law into their own hand. It was learnt that the police had specifically drawn the attention of the community to anything strange and which could be a bomb on the farms or within it, asking the local chief to, in such instances, alert the police for action.

Chief Emmanuel Onuh confirmed the police instruction although it was also learnt that following the Agatu incident, mobilisation around the area, stretching from Ojapo up to the railway districts in Idomaland such as Utonkon, Igumale, Ulayi might have reached frightening levels in anticipation of plausible attackers. Given the strong reservoir of retired soldiers and angry youths in the region, analysts speak of the need for the government and the police to do more to avert violence of staggering proportions should there be a bloody clash of any types. A recent similar scenario at Effeche Aiona was described as a fierce and successful resistance although there is authoritative comment on whether the repelled forces were herdsmen or sundry entrepreneurs of violence.

The helicopter incident at Opialu is a bit complicated. Although vast, with over 3000 registered voters, which does not include children, Opialu could attract electoral attention of politicians. It is, however, not a homogenous voting community as to say it is being put under surveillance for voting against any particular interest. There is also no such regular pattern of herdsmen movement into the area previously.

The Federal Government is currently probing the Agatu mayhem where the police said no helicopter actually appeared on the eve of the violence even though that is what is widely believed. No official comments could be obtained on the state of surveillance of aircrafts, particularly into the rural areas. But some security analysts express the fear that Nigeria might be experiencing a deliberate programme of keeping it under fear, thereby imposing a siege mentality. Analysts still make reference to the online article by Gordon Duff, a somewhat repentant mercenary in 2011 claiming that Nigeria was targeted for destruction. The claim is that some of what he listed as scheduled to befall Nigeria have been playing out. The article in question was re-published in some Nigerian newspapers.