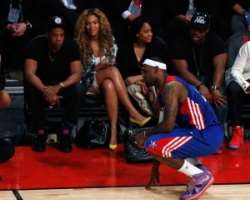 Although Jeff Adrien may be fighting to stay out of jail in light of his felony charges for stealing a valet car, that didn't stop him from making some accusations of his own. The former NBA baller has now accused Lebron James of trying to hijack Beyonce from Jay Z in what seems to be a crazed Twitter rant.

In a heated one-man conversation on his Twitter account, Adrien chose not to take the high road, picking the Cavalier star as his main target. For some unknown reason, Adrien proceeded to fire several shots in Lebron's direction, calling him a “b****.”

“What's funny is @kingjames from bs Akron thinks he's gunna take @Beyonce away from Jay-Z… This is endless conversations folks,” he tweeted. And if you weren't aware, Adrien is a die-hard Jay fan. He polished off each tweet with “Hova The God.”

It is a little unclear why Adrien decided to take multiple jabs. It may have something to do with the meme that has been floating around of Jay Z and Beyonce sitting court-side as Lebron huddles close, but it was not mentioned. Maybe Jeff Adrien didn't want this to be a one-sided conversation though. “I'll be waiting patiently,” he tweeted. “HOVA THE God… ROC… Bitch @kingjames aka female dog!!!!!!!! Or dirt or w/e we the roc want it to be.”

Maybe that was an invitation for Lebron to counter the argument. But it's safe to say Adrien will be waiting a long time