Ooni Of Ife Finds Love In Edo For N24 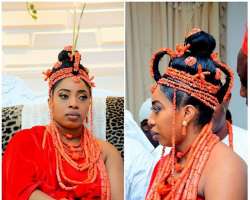 Although the monarch was not physically present, he was, however, represented by his father, Omooba Oluropo Ogunwusi. In accordance with Benin traditional marriage rites, Wuraola sat on the lap of Ooni's father at the count of seven and was later presented to the monarch's family by her father, Mr. Williams Obanor, after the payment of the bride price. According to tradition, she was presented with gifts from her immediate family, including a local mortar, broom, pot and at least a box of cloths.