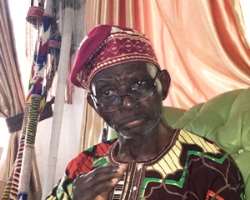 The pathetic story of how the daughter of a retired military officer was knocked down by one of the vehicles in the convoy of a military governor of the Old Oyo State informed the decision by the Governor of Osun, Ogbeni Rauf Aregbesola named the College of Education Ila-Orangun, after Major Adeyemi Oyedotun, a retired Army Officer from the ancient city.

While renaming all the state-owned tertiary institutions in the state last Wednesday at the state capital Osogbo, Aregbesola had declared that the College would be referred to as Adeyemi Oyedotun College of Education.

Investigations have revealed that the pathetic story behind the location of the College in Ila-Orangun happened in 1978 while he was serving in the military in Ibadan.

It was said that while the Major Oyedotun was returning from church with his family along the Iyagangu Area of Ibadan, a driver in the convoy of the then Military Governor of Old Oyo State, General Paul Tarfa (rtd) had knocked down little Miss Adepeju Oyedotun.

The three-year old girl was said to have given up the ghost before getting to the hospital.

It was gathered that Military Governor got wind of the sad incident and quickly paid a condolence visit to the bereaved Oyedotun.

Pa Oyedotun told our correspondent that though the death of his little girl was painful but he took the incident with equanimity, describing it as an act of God.

The 77 year old retired soldier disclosed that the death brought him face-to-face with the then governor, who also requested that he (Oyedotun) should come and see him at the Government House.

It was at this second chance meeting, according to Pa Oyedotun, that Gen. Tarfa asked him what he would like government to give him as a compensation for the unfortunate death of his daughter.

"I had dreamt as a soldier of meeting with the governor one day. It was this sad event that brought the chance.

"And when the Governor asked me to name anything I wanted as a compensation for the loss of my little girl, I saw an opportunity to fulfill an ambition I had nursed overtime to do something for my town.

"So, I told the Governor that I did not want any monetary thing as compensation. I asked him to do something that will endure the test of time for my town.

"That was how Gen. Paul Tafa (rtd) created the College of Education in Ila-Orangun," Pa Oyedotun said.

He added that he did what he did at that time because of the love he has for his home town.

Expressing surprise that the College now bears his name, he said if he had asked for money, house or other monetary gratifications, he would have expended everything by now.

He expressed gratitude to Aregbesola for naming the College after him, saying that the Governor's good gesture has brought to him joyous remembrance of his daughter lost in that incident 38 years ago.