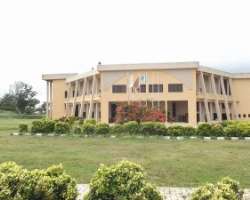 …..consider the option of approaching a Court to seek redress

The Alumni of the University of Osun State (UNIOSUN), Osogbo has

rejected the recent renaming of the University by the State Governor,

Mr. Rauf Aregbesola.
The governor had during its 4th and 5th combined convocation,

Esa-Oke and former Attorney-General and Minister of Justice, Late

Chief Bola Ige.
The old students think that the action was immaterial at this point in time, and want Mr.

Aregbesola to reverse the action.
They are indeed considering  the option of approaching the Court of

Competent Jurisdiction in the land to seek redress on the subject

matter if Governor Aregbesola refused to reverse the action to status

quo.
They complained that  the Governor just took the decision unilaterally

without considering the interest of all the stakeholders of the

University (UNIOSUN).
There position was contained in a statement issued and signed by Mr. Oluwatosin

of the Alumni respectively, a copy of which was made available to newsmen

on Sunday.
Renaming of the University after former Governor old Oyo-State, late Ige has generated mixed reactions, with some seeing the action of the governor as just seeking to score cheap political point, while others, particularly the members of the ruling All Progressives Congress,

(APC) see the action as welcome development.
The school’s alumni maintained that they rejected the renaming after late Ige  because Chief Bola Ige had nothing to do with the establishment of the

in December 200.
Besides, they said that the new name would generate the  the acronym BIU which would clash with Benson Idahosa University(BIU).

They further alleged that Mr. Aregbesola had not been funding the

University for the past two and half (2 ½) years now, saying that it survives on the ingenuity of the

Alumni body said it was totally rejecting the renaming of the

University at this point in time when the University was facing

financial difficulty.
They added that it was a misplace my of priorities to embark on such project of renaming any institution

at this point in time, when the economy crunch was biting every sector

of the country hard..
According to Alumni: “Renaming of the University of Osun State,

popularly called UNIOSUN, after late Cicero of Esa-Oke and former

Attorney-General and Minister of Justice, Late Chief Bola Ige at this

point in time, is immaterial and misplacement of priority. Chief Bola

Ige has nothing to do with the establishment of the University. Mr.

Rauf Adesoji Aregbesola action on the development is political and

confusing and also, against the wishes of the UNIOSUN concern

stakeholders.
“The UNIOSUN is to bear the same acronym with Benson Idahosa

Alunmi of the UNIOSUN, we are totally rejected the renaming of UNIOSUN

because Mr. Aregbesola has failed to perform its constitutional duty

in financing the University as its Visitor. We are ready to approach

the Court of competent Jurisdiction for redress if Governor Rauf

Adesoji Aregbesola is NOT reversing the University to the status quo