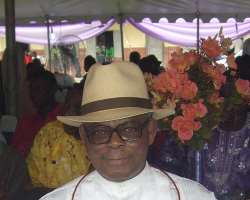 The politician and businessman passed on after a brief illness at about 1:pm in Lagos on Saturday, a family source said.

The 80-year-old indigene of Agbarho in Ughelli North Local Government was a one time President General of foremost Urhobo Progressive Union (UPU).

Felix, one of the four of the famous Ibru brothers, was born on 7 December 1935 at Agbarha-Otor in the Ughelli North local government area of Delta State to Chief Peter Epete Ibru.

He started his political career in 1983 when he contested for a Senate seat and in 1991 he was elected as the first executive Governor of then new Delta State.

He is survived by six children and many  grand children.

Although, the Ibru family is yet to issue a formal statement concerning the death, a close family source confirmed the development.