Army's Reason for Invasion of Ogoniland is Ridiculous 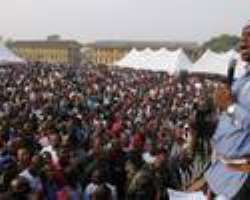 When a mighty army demonstrates its strengths against small, weak and innocent civilians killing pregnant women, children, men and women, it is the responsibility of society to rise against such degeneracy and demand justice for all.

About two weeks ago, February 22 and 23, Ogoniland was bleeding from military bullets. An estimated 42 persons had been killed by the Nigerian Army in a raids the authorities claimed were targeted at former militant, Solomon Ndigbara. We are yet to see any meaningful action on the part of the authorities regarding a probe withing the army or any disciplinary action taken against the soldiers responsible for these killings.

Speaking this week before the senate and house committees probing the killings, Chief of Army Staff, General Buratai said the raid was justified by the alleged burial of its security informant in the state by a cult group known as Island Cult.

Buratai's statement corroborates Senator Magnus Abe's earlier allegation of the kidnap of his loyalist, Pabby Koryene shortly after the raid on Yeghe and the other Ogoni communities.

But there are reasons to believe the raid on Yeghe and the other Ogoni communities were for March 19 - the day scheduled for the parliamentary re-run elections in Rivers State. The heavy media propaganda to justify the raid has not helped matters as it continues to reveal and make clearer, a correlation between the raid and the forth-coming parliamentary elections. Infact. politicians of the ruling party's extraction have been more defensive of the raid than the Army itself while the opposition party had been very critical of the actions. I have in an earlier publication dealt with the issue of who the army raid on Yeghe targeted (see http://www.ogoninews.com/columnists/96-fegalo-nsuke/700-military-invasion-of-ogoniland-matters-arising ).

The news of Pabby's kidnap had been broken by Senator Abe during a radio programme. The Army has just confirmed the story and has gone further to tell us the killers have been identified. Having identified the killers of Pabby, i would reason that the Army should work with the Police to arrest the killers and have them prosecuted. This is not an issue to further dehumanize innocent women, men and children like we saw on February 22 and 3.

The Army;s testimony on Pabby's death was very definitive. Buratai was quoted by the Punch Newspaper of Friday March, 11, 2016 to have said Pabby was "buried alive by the leader of a cult group known as Island cult". Gen. Buratai must have been reliably intimated by another trusted source, providing such a strong information and even identifying the killer of Pabby and the circumstances surrounding his death.

More than that, the public will be interested in more specific details like what is the name of the leader of the Island cult and who are the members so far identified by the security operatives. It wouldn't be enough to just mention the name of a group but we want to know how and why they have been linked to this crime.

We would expect professionalism on the part of the security forces and count on security intelligence to get the killers of Pabby. It will be absurd to chase innocent people out of their homes to become refugees in neighboring villages under the guise of looking for Pabby's killers. This has been common in Nigeria and particularly in Rivers State when political interests come to play. As we approach March 19, we count on the Police to secure our communities and not yield to the bidding of politicians.

It will be expected that working with intelligence, Pabby's killers should face justice sooner than later.

The people of Yeghe should not be abused any further as we have seen on February 22 and 23 simply because some persons want to take advantage of a sad and highly regrettable event as the death of Pabby. May his soul rest in peace.

The writer, Fegalo Nsuke is Publicity Secretary of The Movement for the Survival of the Ogoni People (MOSOP). He wrote from Port Harcourt