EFCC probes another withdrawal of N10b by Jonathan 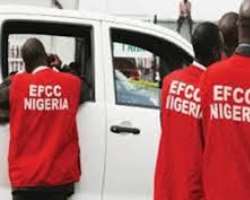 The Economic and Financial Crimes Commission (EFCC) is looking into how another N10 billion was withdrawn from Signature Bonus Account (oil block account) barely seven weeks to the inauguration of President Muhammadu Buhari.

The cash was part of the N76 billion officially approved for withdrawal before the handover date to the new government.

“In view of the above, mandate for the payment of N10 billion in favour of ONSA, based on the bank details, is enclosed abc for the AGF's consideration and approval.

“The USD equivalent of the amount in Naira is to be debited to the Signature Bonus Account with JP Morgan Chase, please.

“Kindly note that the other two expenditure items will be processed in the relevant files in due course.

“The above is submitted for the AGF's consideration and approval and countersigning of the mandate for N10 billion abc.”

A reliable source in EFCC said: “We have been investigating massive withdrawal of funds for either special services or extraneous items in the last few weeks to the inauguration of this new administration.

“The total requests sent to the Accountant-General of the Federation amounted to N76 billion but we have been trying to establish whether or not the three tranches were withdrawn before May 29, 2015 when the handover was effected.

“This latest N10 billion appears different from a similar amount deducted from CBN account for PDP Nomination Convention. The Mandate date was April 9, 2015and the nomination convention was in 2014.”

Meanwhile, the ongoing investigation of the activities of the Office of the National Security Adviser (ONSA) has revealed that about N16.5 billion was released to the Nigeria Police, Nigerian Air Force, Nigerian Army and ONSA for “logistic requirement for 2015 elections.”

“All the payment details have been received from the Central Bank of Nigeria for scrutiny.

“This explains why some of the accused persons on trial were rearrested for questioning. We have been uncovering many transactions which require more explanation.”