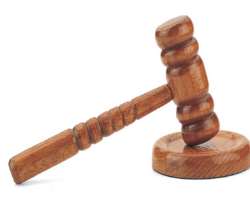 Governor Adams Oshiomhole while swearing-in the judges, noted that 'the judges that have just been sworn in are not new on the bench. It is more of a formality because they have been serving the state as Judges at the Customary Court of Appeal which has now been abolished and with the approval of the National Judicial Council, my Lord, the five judges of the Edo State Customary Court of Appeal have now been formally reunited with their brothers in the Edo State bench.

'Let me say publicly that although we have had to swear you in again, we are not backdating your appointment but your seniority remains because you have since been appointed as judges. So, for the purpose of seniority on the bench, it is your date of first appointment as a judge in the customary court that will be used.'

'By this singular action, we now have 29 judges of the state High Court and I believe this addition will mean quicker access to justice and the number of pending cases in the Edo State High Court over the next couple of months or years would be reduced considerably because we now have more judicial officials that are able to hear those cases.

'I think it is only important that we use this medium to explain again to our employers, the people of Edo State the rationale behind this decision and the full implication of this decision. First, by the abolition of the Customary Court of Appeal, we have not abolished the right of appeal for anyone who wishes to appeal the decisions of the customary court president. The right of appeal is guaranteed, except that the Chief Judge of the State will have the right and duties to empanel judges as he deems fit and as the occasion may demand, to hear cases that may arise from decisions of Presidents of Customary Courts. So, access to appeal have not been abolished, it is guaranteed and therefore, those who might wish to suggest that we have abolished the right of appeal should know that those rights are very well preserved and they will be guarded jealously.'

He continued, 'My Lord has had to set up special courts. For example, I am aware that we have special courts in respect of criminal cases but that doesn't mean that those judges cannot hear other cases. If My Lord wishes, those judges can be assigned to any other case. So I think what this law has done is to allow flexibility, but also to give opportunity to our otherwise very brilliant judges of the Customary Court of Appeal who before now could not hear other cases except if they relate to Customary Court matters.

'I believe as I have argued in the past that you can't have such collections of fine brains and denied them the opportunity to use those brains but much more importantly, to give our people the opportunity to benefit from the industry and intellectual capacity of our judges that have been on the Customary Court of Appeal who were not able because of the limitations of their jurisdiction to hear cases that falls outside the jurisdiction of the Customary Court judges.'

According to Oshiomhole, 'I think it is a win-win. People will have greater access to justice, judges who have the potentials to become Chief Judges of this state don't need to seek transfer when they are approaching that level in order to be able to enjoy the benefits of seniority. I can't see any loser except there is anyone who wouldn't want to work.

'What this amendment has done is to task our judges and to empower the Chief Judge to redistribute more cases to judges who before now, on a good year probably don't have more than 6 cases to hear pending before 6 Judges when you have average of about 400 cases pending before each of the Judges of the State High Court.

'So, I congratulate you. I have no doubt that you already have a tradition and a commitment to excellence which you have been displaying in the Customary Court and joining your brothers in the High Court, it is just to expand your jurisdiction.'

'So I congratulate you and I want to use this occasion, My Lord, to assure you of the commitment of this administration to continue to cooperate and collaborate with you. We will do our best to ensure that the remuneration of judges and their privileges are not delayed.'

Responding on behalf of the newly sworn-in judges, Hon. Justice Mary Nekpen Asemota pledged their commitment to impartial and quick dispensation of justice in the State.

She said, 'The 27th of this month will make it exactly 8 years that we were sworn in as Judges of the Customary Court of Appeal. We want to pledge before Mr. Governor that we will abide by the oath we have just subscribed to and do our best to bring the judiciary of this State forward and on a larger scale the judiciary of the nation forward. We will not bring the judiciary to disrepute. God has been helping us and we also believe that God will continue to help us.' - The News.