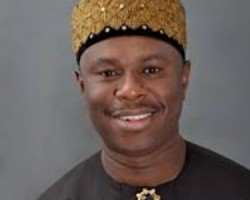 The former Gubernatorial candidate of the All Progressives Congress in Rivers State, Dr Dakuku Peterside has been appointed as the new Director General of Nigeria Maritime Administration and Safety Agency.

The Ministry of  Ministry of Transportation announced the appointment via a statemnt signed by officeYetunde Sonaike,director of media and public relations in the Ministry.

Rotimi Amaechi, immediate past governor of the state, is the incumbent minister of transportation.

Peterside is a strong ally of Amaechi, who fought a battle of his life with the candidate of his former party, People’s Democratic Party, Mr. Nyesom Wike, in the former’s failed bid to instal Peterside as his successor.

Mrs Ibim Semenitari, who was te commissioner for Information to the former Rivers State Governor Amaechi, was recently appointed as the acting Managing Director of NDDC.

Pundits believe that these ppoitments are strategic initiatives by the APC to build up capacity for the battle of 2019 in Rivers State, which the party considers key to its sustenance in power.

A statement from NIMASA Thursday confirmed that President Muhammadu Buhari has appointed Dr. Warisenibo Dakuku Adolphus Peterside as the Director General/CEO of the NIMASA.

Dr. Peterside holds a Doctor of Philosophy (Ph.D) degree in Management Sciences (Organisational Behaviour) from the University of Port Harcourt with an MBA in Business Administration and Bachelor Degree in Medical Laboratory Sciences (B.MLS) in Haematology both from the Rivers State University of Science and Technology.

He has also attended high level management trainings at prestigious institutions including the Harvard Kennedy School, Harvard University, Kellog School of Management Chicago, J. Mark Robinson College of Business Atlanta-Georgia all in in the United States as well as the Galilee College in Israel amongst others.

Dr. Dakuku Peterside was at various times the Chairman, Opobo-Nkoro Local Government Area of Rivers State, Senior Special Assistant to the Governor of Rivers State on Works, Executive Director of Development and Leadership Institute (DLI) and Commissioner of Works in Rivers State.

In 2011, Dr. Dakuku Peterside was elected to represent Andoni/Opobo-Nkoro Federal Constituency in the House of Representatives where he chaired the House of Representatives Committee on the Petroleum Resources (Downstream). He was the governorship candidate of the All Progressives Congress (APC) for Rivers State in the April 2015 general elections.

Born on December 31, 1970, the new NIMASA DG is a native of Opobo Kingdom from Opobo-Nkoro Local Government Area of Rivers State.