Only A Fool Will Obey Wike’s ‘Resist Arrest’ Directive - APC 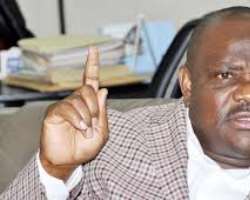 The Rivers State chapter of All Progressives Congress, APC, has condemned the directive by the governor of Rivers State, Chief Nyesom Wike to PDP members to resist illegal arrests before and during the forthcoming rerun elections in the State.

The APC in a statement signed by the State Publicity Secretary, Senibo Chris Finebone, advised Rivers people to discountenance such inciting directive by the governor as it is capable of pitching law enforcement agents against innocent citizens of Rivers State.

“The APC wishes to advise Rivers people irrespective of political affiliations to act within the law before, during and after the March 19 re-run elections in Rivers State. This appeal has become necessary at this time with the backdrop of the highly troubling, inciting and unlawful directive by Gov. Nyesom Wike to PDP members to resist unlawful arrest by security agents,” the statement said.

According to the APC Spokesman, the APC believe that the directive by the governor to his party members was mischievous, dishonest and dangerous.

He said: “Indeed, it raises several questions. Did Gov. Nyesom Wike properly explain to his party members how to differentiate between legal and illegal arrests? As a lawyer, does the governor know that reasonable and lawful response to arrest [whether legal or illegal] is not to resist it which is in itself unlawful? Did Gov. Wike explain to his supporters the different dimensions and scenarios that resistance to arrest can result to?”

“The APC continues to be concerned at the desperation of Gov. Nyesom Wike for political power even when his methods portend danger to lives and property of the innocent and hapless. As a political party, the interest of the APC remains the safety and wellbeing of the citizenry irrespective of party affiliations. We believe that a state governor should sometimes drop the partisan toga and assume the more honourable task of safeguarding the lives and property of the generality of the people.

“Having been said to have climbed on dead bodies to become governor [apologies to Prof. Itsay Sagay], Chief Nyesom Wike should now realise that the killing and maiming of innocent Rivers people, whether members of PDP or APC, must stop immediately. Even as the leader of the PDP in Rivers State, he has no right to put the lives of PDP members in harm’s way through manipulations and grandstanding. It is enough that he has vowed to gatecrash into INEC and no ‘Boko Haram’ Army will stop him on election day; the APC wishes him well. But he must not take others along on his suicide mission.

“Quite frankly, the APC notes that the governor now acting like a bull in a china shop must realise that many have acted and even exceeded him in lawlessness, recklessness and false bravado in the past but history has its sad tales of them. If the governor is in doubt, when next he attends a burial at the cemetery, he should take a closer look at the writings on the tombstones. But like they say, ‘you may borrow trouble but do not lend it to your neighbour,’” the statement said.

The APC Spokesman called on well meaning Rivers people to stay out of harm’s way during the forthcoming elections by rising above the mediocre style of Gov. Nyesom Wike which bothers on obscene desperation reminiscent of someone on a suicide mission.State Publicity Secretary