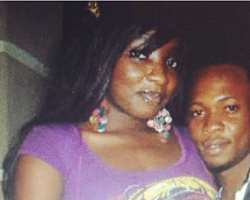 Curvy Nollywood actress, Anita Joseph, is seriously using her physical structure to cause some form of obstruction anywhere she steps her feet into.

A picture the actress shared recently gives some imaginative clue that she might have had something in the past with singer, Flavour, while he was still coming up in his career.

Sure some ladies will want to have a taste of the singer especially always revealing his 6 packs to attract attentions and maybe Anita, may have had her hands felt it before other babymamas started coming in.

Though an old picture, but it shows that with her body size, Flavour still had the strength to carry such a curvy woman who has been the toast of many.