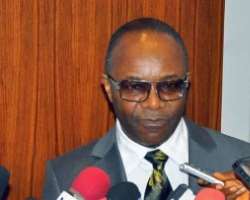 The Minister of State for Petroleum Resources and Group Managing Director of the corporation, Dr. Ibe Kachikwu, on Monday announced the unbundling of the  Nigeria National Petroleum Corporation.

The corporation has been split into seven divisions, comprising 20 subsidiaries, Kachikwu told journalists in Abuja on Tuesday

The minister also cleared the air on confusions over the actual status of the subsidy regime on petrol and kerosene, saying that contrary to MIs-readings of the government policy on that sector subsidy had not been terminated by the Federal Government.

According to him, what the government has done is to modulate the prices of the commodities based on the fall in crude oil prices internationally.

The minister, who spoke in details on plans and actions undertaken by the government, both in the oil sector and at the national oil firm, said, “The President has approved the final phase of restructuring of the NNPC.

“Under that phase, we have five business-focused divisions – the upstream, which you used to call E&P (exploration and production); the downstream; the gas power marketing, which is a pull-out from the E&P; the refineries group, which is basically for all the three refineries; and then of course the ventures for every other little company that is here and there, thrown all over the place that doesn't seem to have a sense of direction.

“So, the ventures will to act like the incubation centre where you nurture these companies through management, get them very efficient and then decide whether you want to spin them off to be on their own independently, or whether you want to throw them to the stock exchange. So, when I hear unbundling into 30 companies, that is not correct.”

He added, “If you look at the companies that will come underneath these divisions, we have a total of 20 firms on the whole. We had about 15 before, so only about four or five are new introductions. These subsidiaries are already there, we only added a few. Among those earlier divisions that I've given you, we also have finance and services, and that brings it to seven divisions. But five are business-focused, while the others provide services.

“Why are we doing this? It is because quite frankly, the NNPC is very over-staffed. So, we have to create work in order to ensure that everybody who is in the system will be busy and earn money. And as we began to do that, we realised suddenly that we had adequate staff and we are not really as over-staffed as we thought initially. So, the principle of our restructuring, which was approved by the President, is that nobody losses their work.”

Under the unbundling, the corporation converted the Group Executive Directors , GEDs, to Chief Executive Officers, CEOs, and redeployed them to the various business components.

Kachikwu said that the  movements were part of his strategy to ensure that each of the former GEDs pushed what used to be the former divisions in the group to profitability.

The minister said that the new arrangement is targeted at eliminating will bureaucracy in the operations of the corporation and that each of the constituent units would be profit-driven.

On fears that the new steps would conflict with the provisions of the Petroleum Industry Bill, the GMD said he was speaking with members of the National Assembly and that the structuring agreed with the PIB, in principle.

“What we are doing is anticipation of the PIB. We are tailoring it towards the PIB because we are in conversation with the legislators,” he said.

He allayed fears of job losses among staff of the corporation and all its subsidiaries, saying his mandate did not include sacking workers. He said, “There are lot of worries that they would be a lot of job loss in the system, one can understand that given what is happening in the global oil industry. Any attempt to transform, people would think there would be job loss.

“We are quite truly overstaffed but the principle of the restructuring is that nobody loses his or her job but everybody will get busy. “I do not have the mandate of the president to create a job loss situation, his mandate is to try and ensure, unless for reasons of bad staff performance, fraud, which obviously requires investigation, there is no mass attempt to let people go and the present structure has a zero sum game in terms of job loss for now.

“When the entities begin to run their business, the managing directors would look at it and see how they create enough utilization for everybody who is in there and if there is the need to change that model, they would come back. That would be the call of an MD of a subsidiary company to make, not the call of the GMD.”

The GMD said that his team planned to stop the importation of refined products in the next 12 to 18 months. And the strategy, he said, include the partnership with Joint Venture partners and other investors who have been invited to co-locate new refineries within the premises of existing ones.

Kachikwu stated that the process of fixing the refineries had started and that the NNPC was looking at entering into a series of partnerships with investors and oil majors on the upgrade of the refineries and in co-location of refineries along with existing refineries.

However, he said to fix the four refineries, the country would require about $400 million, adding that the Federal Government was considering sourcing the amount from investors. According to him, the total revamp of the refineries is being hindered by lack of funds and investment, especially as most of the refineries are old and needed massive overhaul and refurbishment.

He said talks were already ongoing with the original builders of the refineries and some oil majors who had shown interest in investing in the upgrade of the refineries, adding that when the refineries were finally fixed, they would contribute in building the country's strategic fuel reserves. Furthermore, he explained that addressing the issues of JV cash call arrears and ensuring adequate security of the pipelines and other critical petroleum infrastructure was part of its grand plan to boost Nigeria's crude oil output to 2.4 million barrels per day before the end of this year.

On fixing pipeline On the damaged Excravos facility, he said: “We have been, after six years, to get back the Brass-Port Harcourt pipeline and we have started pumping to the Port Harcourt refinery and it resumed production just a few days ago.

“We are putting in a lot of effort to see how we can get back the pipeline from Escravos to Warri. In the interim, we have resorted back to trying to move on a temporary basis, crude cargo into Warri, using vessels. But short of leaving Kaduna and Warri idle, while still trying to restore the pipeline, we had to negotiate hard and take an emergency position and send crude. So, crude is being pumped to Warri as we talk, but by vessels, which is not the most ideal.

“The hope is that before the end of the month, the three refineries would have received crude and hopefully begin to work and that would soften the situation.”

The minister made it clear that the government had not removed subsidy. He however, said that at the current crude oil prices at the international market, there was “subsidy gain” for the federal government.

He said it would enable his team to build up reserves for a period in the future when crude oil prices would rise , as being anticipated.

His words, “We have not removed subsidy. What we have done is to ensure that we don't pay subsidy. We have moved from subsidy obligation to subsidy gain.”