New LCDAs Will Constitute No Financial Burden On Us—Aregbesola 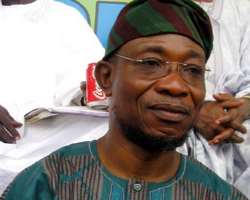 The Governor of Osun, Ogbeni Rauf Aregbesola on Tuesday said that his administration will make ‎judicious use of its revenues in such a way that increasing the number of councils will least constitute any financial burden.

This was even as he dissolved the management committees of the existing 30 Local Councils and Area Office and their Executive Secretaries, deputy executive secretaries, members, Special Advisers and other functionaries.

The Governor stated this in a state‎ broadcast to the people of the state on the creation of additional 31 Local Council development Areas, 3 area Councils and two administrative offices.

‎The request for additional local councils by the people of the state after several legal procedures was sent to the state House of Assembly in form of an executive bill.

The House looked into the bill, set up a committee and subsequently, a referendum was held on February 19, 2015 in which the people of the state overwhelmingly gave a Yes vote on the bill.

Aregbesola, speaking on why the state is creating more councils at this special time of financial challenges, held that his administration has given it sufficient consideration, saying he has put in place procedures that will cost less and safe money thus bringing rapid development.

He added that the primary responsibilities of the newly created councils are to bring development to the people, market management, revenue mobilisation and generation among many others instrumental to the yearnings of the people.

The Governor stated that the state will be saving huge cost with the new system adding that the same number of staff will still run all the councils and no new appointments will be made to existing ones.‎

‎He hinted that the entire local government system will be managed by Council Managers for three months, adding that managers shall be appointed and deployed by Local Government Service Commission from among the substantive grade level 14 officers in the local governments.

He said, "Many would be wondering and asking: why create more councils at this special time of financial challenges? We have also given sufficient consideration to this. With this new parliamentary system, it will cost less to run the new councils and save a lot of money for the government than in the past.

"The primary responsibilities of our new local government system are sanitation, market management and revenue mobilisation and generation. This is consistent with local government administration worldwide.

"The beauty of this new system is its parliamentary nature, which requires the chairman and the vice chairman to be elected by the councillors from among their own ranks, thereby saving cost," The Governor told the people of the state.

He added that the creation of additional local government should not be seen as being alien in the sense that In advanced western democracies, the local government controls the police and provides many municipal services to the people.

The Governor also highlighted the importance of the local government, saying that the usefulness of this smallest tier of government cannot be overstated.

According to him, "It is where the government is designed to be closest to the people. While you need to follow some protocols for reasons of security and tight schedule before having an audience with a minister, a state governor or the president, you can walk in on your local government chairman or other officials of council.‎

"Also, because the geographical space of the local government makes it the smallest unit of administration, it is easier to get things done at this level. The local government is also the ideal training ground for political leadership".