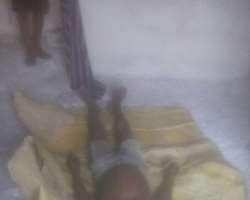 Today Monday 7th March in Buguma, Asari-Toru LGA of Rivers State, PDP thugs working for the illegal Asari-Toru CTC, Sobomabo Jackrich, went on rampage and in the process killed and burnt Mr. Ofinjite Amachree, an APC Chieftain in Asari-Toru LGA. He was attacked by known PDP thugs, beaten to coma before setting him ablaze. His burnt corpse is attached herewith.

It would be recalled that last Saturday by about 8pm, an APC Chieftain, Franklin Obi was killed and beheaded by assailants in his home. His wife and son were also killed. The killing happened less than 48 hours after late Franklin Obi, APC Ward 4 Chairman in ONELGA conducted an APC congress in Omoku Thursday March 3, 2016.

The APC believes that the present killings are part of the scare tactics of the PDP, something the state governor, Nyesom Wike referred to after his Supreme Court victory. He had said that if the annulment of his election was upheld by the Supreme Court, so many people would have died in Rivers State. We are rather surprised that even with the affirmation of his election by the Supreme Court, many people are already being killed by the PDP in Rivers State because of the national and state legislative rerun elections scheduled for March 19.