EFCC is a toothless bulldog : Obasanjo 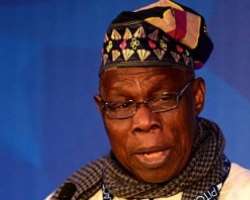 Former President Olusegun Obasanjo in his usual manner berated the Economic and Financial Crimes Commission, EFCC, when he described it as a toothless bulldog.

Becoming nostalgia Obasanjo said, though the anti-graft body became dreaded during the time of the pioneer Chairman, Mallam Nuhu Ribadu, it has become a toothless bulldog.

He spoke on Saturday during his 79th birthday celebration, held at Olusegun Obasanjo Presidential Library (OOPL), Abeokuta, the Ogun State capital. He wondered what had happened to the anti-graft agency that led to its present status.

Continuing he said , gone were the days when the people believed that “the fear of Nuhu Ribadu is the beginning of wisdom”.

The former President, however, advised the Buhari government and stakeholders to take a critical look at the situation that made the agency lose its power to tame corruption and avoid it. He said government must avoid any action that could make the agency take a step forward and three steps backward.

Obasanjo said, “Honestly, when Nuhu was handling EFCC, he handled it in such a way that people coined the saying that ' the fear of Nuhu Ribadu is the beginning of wisdom ' and then the question you will ask is, how did we go down? How did we lose that? “Nuhu Ribadu is still here, he's still alive.

The institution we started together is still there, but what made the institution to become a toothless bulldog? What? And that's the matter we have to keep looking at, so that we don't take two steps forward, one step aside and three steps back.”