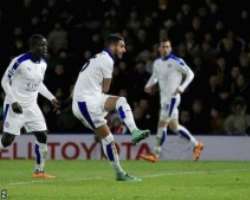 Leicester beat Watford to move five points clear at the top of the table as Riyad Mahrez scored his 15th Premier League goal of the season.

After second-placed Tottenham drew with third-placed Arsenal, the Foxes took a step closer to English football’s most unlikely title win.

Mahrez almost set up Jamie Vardy for an early goal as the Foxes started well.

And a similar start to the second half saw the Algerian rifle high into the net after Jose Holebas cleared to him.

The 25-year-old, who has scored or assisted 26 goals this season, worried Leicester after he seemingly pulled his hamstring late in the game and was substituted but Mahrez later said it was only cramp.

Despite good chances for Watford strikers Troy Deeney and Odion Ighalo, the visitors, who flirted with relegation last season, held on and now have nine games between them and a historic first title triumph.

The victory also takes them 11 points clear of fifth-placed West Ham as the Foxes close on a Champions League spot and they are 41 points better off than they were at the same stage last season.

Each week the character and quality of Claudio Ranieri’s side is further tested as the pressure is ramped up on the team with the least title-chasing experience.

But since the Foxes drew with West Brom on Tuesday, they have seen rivals Tottenham and Arsenal both beaten, before the two north London sides drew in a fiercely contested derby earlier on Saturday.

Watford did not offer the toughest opposition for the visiting team, but an opportunity to eke out a five-point gap presented its own examination.

And they passed it once again thanks to a solid defensive display, energy from the returning N’Golo Kante, and the skill and accuracy of Mahrez, who proved the difference.

The winger was still able to walk off the pitch after picking up his injury, but any problems for Leicester’s star player could yet derail their challenge.