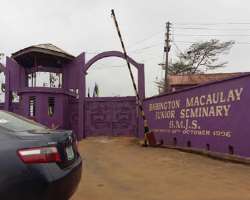 The students, Timilehin Olusa, Tofunmi Popoolaniyan and Deborah Akinayo were kidnapped at about 8p.m. by gunmen who invaded their school, shooting sporadically to scare people away. Three members of the kidnapping gang were also arrested by the police in the course of recuing the girls.

The suspects, who were paraded at Government House, Alausa, Ikeja yesterday, were tracked down by the Inspector General of Police, IGP, Intelligence Team from Force Headquarters, Abuja, with assistance from the Directorate of State Service, DSS, the military and Lagos State Special Anti-Robbery Squad.

The police gave the names of the arrested suspects as Emmanuel Arigidi, who is the prime suspect, James Henry and Akanji Oluwasegun. Briefing journalists on the development at the Lagos State House, Governor Akinwunmi Ambode said men of the state Police Command, DSS and members of the armed forces worked tirelessly round the clock in the last six days to secure the release of the kidnapped girls. According to Ambode, Arigidi's arrest led to the operation that secured the release of the abducted children.

He said: 'The three girls have been safely reunited with their families and the government wishes to assure Lagosians that their security is top priority and it will not relent in ensuring that Lagos remains safe and secure. 'Let me warn that the state government will not tolerate kidnapping or any forms of crime in the state. Our position is clear and unambiguous; Lagos state has the capacity and the will to go after every form of crime and criminality in order to safeguard lives and property in the state.

'As our daughters are re-united with their mothers and other members of their families, I would like to seize this opportunity to wish all mothers in Lagos State and Nigeria at large a happy Mothers' Day.'

State Commissioner of Police, Fatai Owoseni said no ransom was paid to secure the release of the girls. Owoseni, who also spoke during the press conference, said the children were rescued using the application of modern technology. The commissioner urged members of the public not to encourage kidnappers to demand ransom as any ransom paid would encourage others to go into the business.

The police commissioner said the girls are in stable condition and were never molested by their abductors. 'The girls are stable, medical attention has been given to them and from what we gathered from the girls, they were not molested by the kidnappers,' he said.

Revealing the role other suspects played in the kidnap saga, the police said Henry registered the sim card the gang used to call the girls' parents, while Oluwasegun gave the gang the recharge cards they used. Mr. Owoseni added that the police are on the trail of other members of the gang and would soon be arrested. It was learnt that the police recovered AK47 rifles and canoes from the suspects.

Meanwhile, the prime suspect, Arigidi, 37 has revealed how the gang kidnapped the girls. He said: 'Twelve of us planned the operation to kidnap the girls from their school. We are twelve in number. It was one Lami Ami who brought the idea and Felix supported him.

'We went to Maya bridge to enter canoe and went to the school around 8p.m. After we gained entrance into the school, we took away three girls to our hideout. But along the line, we had disagreement between ourselves and I was actually the one that started it. I told other members of the gang that what we have done is not good and that I don't like it. 'I know that security in Lagos State is now tight and I was telling others that there was no way we would get away with this kind of job considering the level of security in the state. When I told them that we should end the assignment, other members of the gang threatened to kill me and then I took canoe to run away. 'Three days after I ran away, operatives of the Special Anti-Robbery Squad, SARS, arrested me somewhere in Majidun and that was how I told them how we planned the attack. 'One thing I will like to say is that if not for the fact that I was arrested, they would not have seen the girls because I was the one that revealed everything to the police.' National Mirror